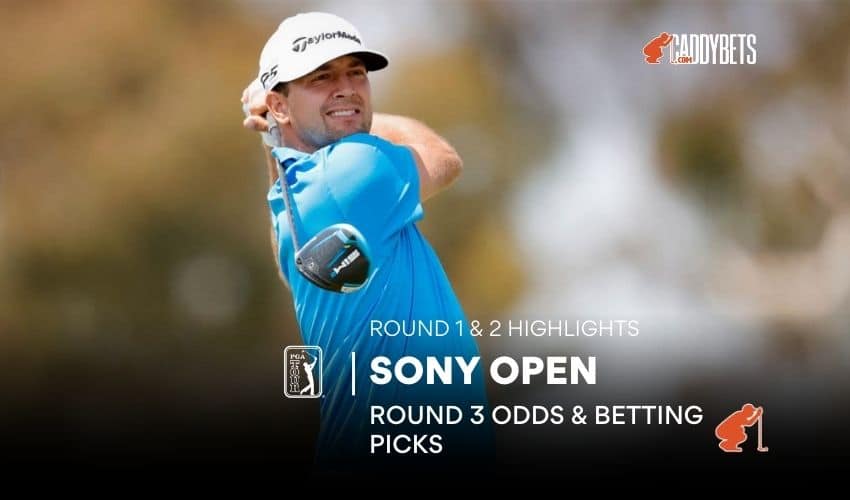 This Sony Open 2023 has reached the halfway stage and the tournament is fascinatingly poised with a whole host of players within five strokes of the leader Chris Kirk.

A joint leader after the first round, Kirk enjoyed another successful day in round 2 and leads the way by one stroke on-11.

In hot pursuit of the American is the American duo Taylor Montgomery and J.J Spaun who will start their third round on -10. Hayden Buckley and David Lipsky will start a further shot back at -9.

Kirk was one of six players who shared the lead after the first round of this year’s Sony Open. Played at the beautiful Wai’alea Country Club, success this week will be down to accuracy. A short course by modern standards, Kirk’s approach play and putting has been exceptional, but he heads into the weekend knowing more will be needed if he is to be successful over the weekend.

J.J Spaun headed into this week’s Sony Open fresh off the back of a top five finish at last year’s Sentry Tournament of Champions. Up with the leaders throughout, Spaun showed throughout the Sentry that he has a game that can compete with the very best players in the world and the American has bought that form into this week.

Priced at a lofty +4000 before a ball was struck – Spaun has shown exactly why many believed he was overpriced heading into the week.

Throughout the first two weeks of the season, Spaun has been able to keep his cards clean and throughout his first 36 holes has recorded just the one dropped shot. Spaun is clearly full of confidence and could be one to watch this weekend.

Up with the leaders after the first round, yesterday’s second round was a disaster for Jordan Spieth who fell away from the pack after posting a disappointing 75. Errant off the tee throughout the day, Spieth couldn’t weave his usual magic and will start today ten strokes off the lead.

Twenty-one players will start today’s third round five strokes off the lead and the tournament and betting looks wide open. Despite heading into today’s third round with a one stroke lead Chris Kirk isn’t the favourite for the event with that honour instead being given to Taylor Montgomery.

Ranked just outside the world’s top 50, Montgomery has enjoyed a stellar rise up the world rankings. Montgomery ended 2022 in fine form and posted top twenty finishes in ten of his last eleven tournaments. This remarkable run of form will set Montgomery up nicely for a charge over the weekend.

As mentioned already J.J Spaun at +500 could be the value play of the weekend. Fresh off his recent top five finish last week, Spaun will be determined to finish even higher this week.

A danger lurking to all in the field could be J.T Poston who will start today four strokes off the lead. Ranked 52nd in the world, Poston was a winner in last year’s John Deere Classic. Poston didn’t finish 2022 in the best of the form but will be looking to start his 2023 with a victory here. A classy player of the day he could be one to back at +160

Latest odds from JazzSports for the PGA Tour’s Sony Open 2023 in Hawaii.

Follow us on Social Media for more Sony Open 2023 updates.