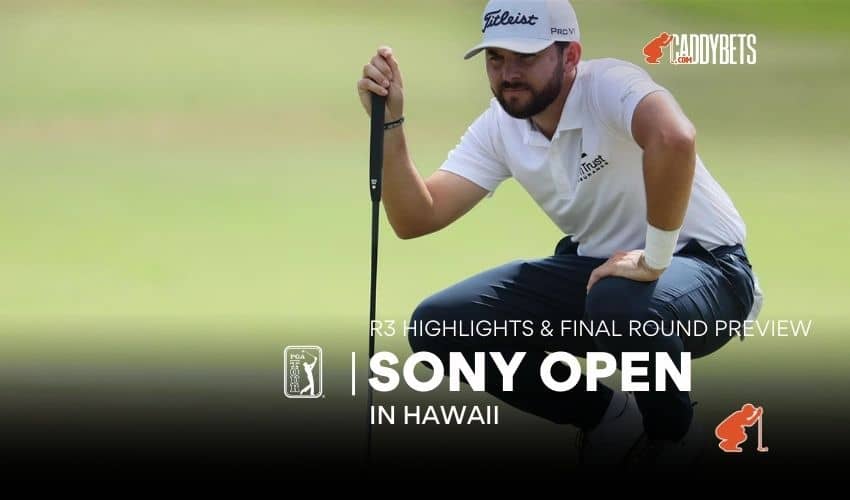 Two eagles on back nine help Buckley lead by two

With scoring conditions proving tough during Saturday’s third round, Hayden Buckley made the most of moving day to head into today’s final round leading by two.

With ‘moving day’ living up to its name, at one point during the third round, eight players found themselves in a tie for the lead before Buckley made his move.

Having birdied three holes in his front nine, Buckley’s day would get even sweeter when the American holed his approach on the par four tenths for an eagle to take the overall lead of the tournament.

A bogey would come on the very next hole, but Buckley would finish his round in style by posting another eagle on the eighteenth. Ranked at 203 in the world, this will be the first time Buckley will have led heading into the final round of his PGA Tour career.

Putnam secures round of the day

Andrew Putnam could be a name to keep an eye on in today’s final round. Despite bogeying two of his first four holes yesterday, the American would go on to score ten birdies in his next fourteen holes to lie just three strokes off Buckley’s lead.

With his two-stroke lead, Hayden Buckley is the clear favorite, but this is a position he is unaccustomed too. Buckley has never won on the PGA Tour and has only finished inside the top five twice in his PGA career, a winner on both the Korn Ferry and Canadian Tours, it will be fascinating to see how he handles the occasion.

Chris Kirk can be backed as the second favorite and the second round leader certainly has a chance. Kirk finished second in this tournament just two years ago and has shown good form for the majority of the week. A solid 68 was ruined by a double bogey on his first hole yesterday. If he can keep his ball out of trouble he will be confident to make a move.

David Lipsky rounds out the top three in the betting. A multiple winner on both the Asian and European Tours, Lipsky has never tasted success on the PGA Tour but after two successive rounds of 66  will believe that today could be his day.

Ben Taylor arrived in Hawaii relatively unknown but the Englishman has placed himself in a great position to win today. After posting a solid 65 yesterday, Taylor’s game is clearly in a great place. Having not made more than one bogey in any of his first three rounds, odds of +750 could be the value play of the day.