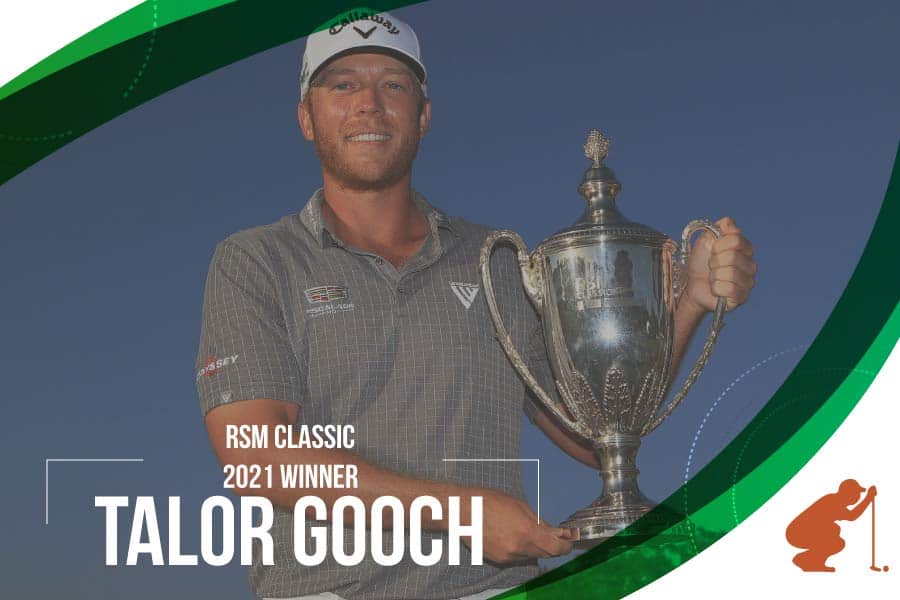 Talor Gooch rebounded from a disappointing final round at the World Wide Technology Championship at Mayakoba two weeks ago by going into Sunday with the lead at The RSM Classic and shooting a 64 to leave little doubt as to who the champion would be this week at Sea Island in St. Simons Island, Georgia.

Gooch won his first-career PGA Tour event by three strokes over Mackenzie Hughes after he entered the day with a three-stroke advantage over Seamus Power and Sebastian Munoz. The win, buoyed by other strong results this year, pushed Gooch to the top of the FedEx Cup standings for 2021-22 as the fall portion of the schedule wraps up and the tour takes a break until January.

Gooch hit just six fairways on Saturday in rough weather conditions but still pulled out a three-under 70 to take the lead. In fairer conditions on Sunday, Talor Gooch hit 16 greens in regulation and didn’t card a bogey the entire round. In fact, he becomes just the seventh golfer in the last four years to shoot a 64 or lower to win a tournament that he came into the final round leading. The others on the list include Rory McIlroy, Dustin Johnson, and Brooks Koepka, so he finds himself in good company with some elite closers in the sport.

Now with his first win, he gets to add a trip to Hawaii to his itinerary in January for the Sentry Tournament of Champions as well as a spot in the Masters in Augusta. But ultimately, his sights are set on returning to Georgia in September—at East Lake Golf Club in Atlanta, specifically.

Gooch became the latest first-time champion in an event that has produced several of them—he becomes the seventh maiden winner in the 12-year history of the tournament.

But like many first-time winners, this is one that you could see coming. Outside of a 60th-place finish in Houston last week, Gooch’s other four starts this season all produced top-11 finishes, and two were in the top five. He shot a 62 on the final day of the CJ Cup to finish fifth against a strong field that included Rory McIlroy and Collin Morikawa. He was in contention at Mayakoba before a final-round 74 derailed his tournament. He put it all together this weekend, showing determination in by posting four birdies on the back nine to finish at a 22-under 260, which tied the tournament record, fending off challenges from Hughes (62) and Tyler McCumber, who shot a 60 to soar up the leaderboard and finish tied for fourth.

“I had 20 [under] in my mind,” Gooch explained. “Get to that and it will make the rest of the field have to do something good. But you almost put limitations on yourself when you think about scoreboards and scores.”

Hughes won here in 2016 and did his best by carding a 62, and it was enough for sole possession of second place at 19-under.

“I know it was going to require a low one today, and if you told me I would have shot a 62, I thought I might be pretty close,” Hughes said after his round, “but Talor obviously played great this week and deserved to win.”

While Talor Gooch was fending off his challengers, McCumber was garnering attention as he was trying to record the 13th sub-60 round in PGA Tour history. After having to birdie two out of his last three holes on Friday just to make the cut, McCumber was sizzling on Sunday. He started on the back nine, had two birdies and an eagle (making a 50-foot putt) in the first half of his round, and then he birdied holes 1 through 5. He had a 55-foot putt on No. 9 for birdie, but he was a bit too strong and missed left. After the tap-in for par, he wound up with a 60 for his first finish inside the top-60 this year. Prior to this weekend, he had missed four cuts and was 62nd at the ZOZO Championship.

Munoz shot a 65 but still dropped a spot to finish third at 18-under. McCumber tied for fourth with Cameron Smith, Power, and Tom Hoge at 15-under. Webb Simpson, who was the betting favorite coming into the event, finished tied for eighth at 14-under with Taylor Moore. Denny McCarthy and Luke List rounded out the top-10 at 13-under.

The pros now take a week off for Thanksgiving before resuming for two unofficial money events in the Hero World Challenge and the QBE Shootout over the first two weekends of December. Then in the new year, the Sentry Tournament of Champions kicks things off as the first FedEx Cup points-paying event of 2022.

Collin Morikawa capped off an incredible year that included a win at The Open Championship and a Ryder Cup victory by becoming the first American to win both the DP World Tour Championship, Dubai and the season-long Race to Dubai title, which is awarded to the leading points-scorer on the European Tour.

He made five birdies over the last seven holes to shoot at 66 on the Earth Course at the Jumeirah Golf Estates in Dubai, overcoming leader Rory McIlroy, who faded a bit down the stretch.

“It’s an honor to be the first American to [win the Race to Dubai], to put my name against many, many greats and Hall of Famers,” Morikawa said after the win. “It’s special. To close it out not just with a top-10 but to actually win … what a great way to finish.”

Fellow American Billy Horschel finished second in the season-long standings, followed by Jon Rahm, Matt Fitzpatrick, and Tyrrell Hatton to round out the top-five finishers on the European Tour this year.

Sign up and make sure to stay tuned for Talor Gooch, updates, golf news and PGA Tour schedule