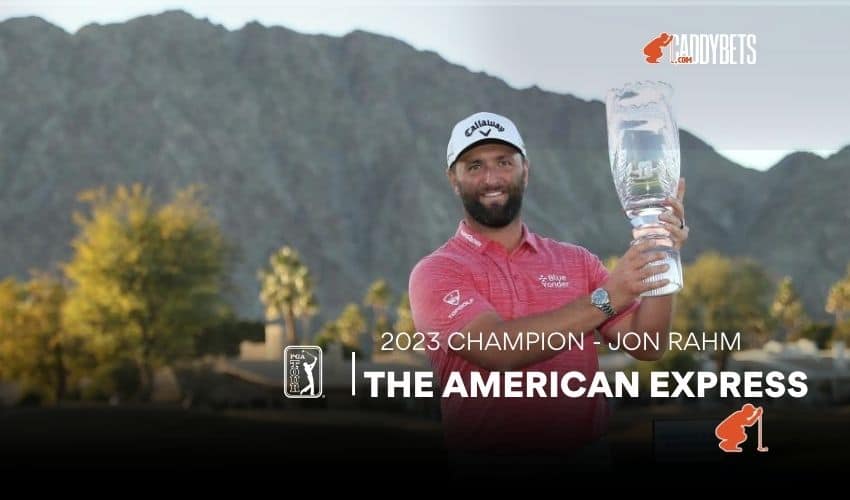 Jon Rahm Continues His Hot Streak at The American Express, Now 2-for-2 in 2023

The Official World Golf Ranking says that Jon Rahm is ranked No. 3 in the world, but our eyes are telling us otherwise.

Rahm entered Sunday tied for the lead with rookie Davis Thompson at The American Express, and the two dueled all the way to the finish line at PGA West with Rahm coming away as the winner by one stroke. Rahm’s 27-under 261 is the best score shot on the current format that uses the Stadium and Nicklaus Courses at PGA West and nearby La Quinta Country Club in the Coachella Valley of Southern California.

It’s the second-straight PGA Tour victory for the Spaniard after winning the Sentry Tournament of Champions two weeks ago, and worldwide, he’s won four of his last six starts.

“I think today was about as comfortable as I’ve been in a long time on the golf course, tee to green,” Rahm said Sunday after the win. “Every time I felt like this in the past, I’ve ended up going on to win, just because it takes a lot of pressure off a lot of parts of my game, knowing that basically, I’m going to hit the shot that I’m envisioning. And that’s a really unique zone to put yourself in.”

After Thompson set a PGA Tour record with five eagles in the first two rounds of this event, he hung with Rahm right until the end. A dose of bad luck on the island-green 17th hole was the difference between defeat and going to a playoff.

Davis’ tee shot landed safely on the green but was a some 45 feet away from the hole. He elected to keep the flagstick in, and his putt hit the stick and dribbled a few inches away from the hole. That birdie would’ve tied things up, but instead, he remained one shot behind Rahm going into the 18th.

While it was a disappointing result, Thompson leaves having made six of seven cuts this season with three finishes inside the top 12.

“I had a great week,” Thompson said. “Competing against the best in the world is my dream, and I did that today and proved that I can hang with ’em. It was a lot of fun.”

Xander Schauffele hit the first albatross of his career and also in the history of the Stadium Course at PGA West when he holed out from 226 yards on the par-5 fifth hole Sunday. His 62 left him tied for third with Chris Kirk, two shots behind Rahm. Taylor Montgomery continued his hot rookie season with a fifth-place finish at -24.

Rahm is in third in the OWGR behind Rory McIlroy and Scottie Scheffler. The latter just missed out on regaining the top spot when his putt for birdie just missed on the 72nd hole. He finished tied for 11th.

Rahm will look for another victory at a course where he’s had success when the PGA Tour moves to San Diego at Torrey Pines. Rahm has won the Farmers Insurance Open before and also won the U.S. Open here in 2021. Four other players ranked in the OWGR top 10 are competing as Luke List looks to defend his first-career PGA Tour win.

Follow us on Social Media for more The American Express 2023 updates.