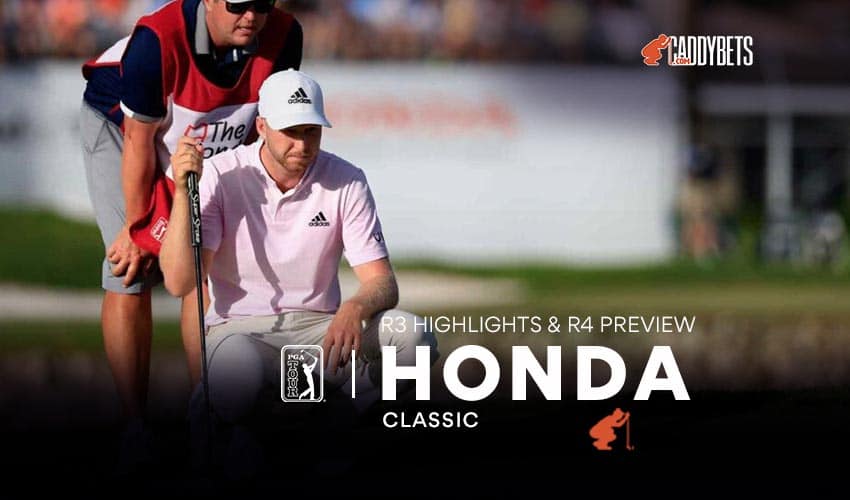 The question heading into the final round Sunday of the 2022 Honda Classic isn’t who will win, but more like, by how many strokes will he win? We are speaking, of course, of Daniel Berger, who is far and away the favorite to win this tournament at -500 odds, as projected by Jazzsports. Here is our The Honda Classic R3 Highlights & Final Round Preview.

Rarely in a tournament do you have one golfer against the entire field, but Sunday’s round four will be the exception.

Berger started with a three-shot lead, avoided any significant setbacks, and ended with a five-shot advantage. His round of 1-under 69 moved him 18 holes away from winning a tournament a 15-minute drive from his home. On Saturday, there were times when it felt Berger would come back to the pack a bit after a few errand shots got him in trouble, but he was able to save par each time, and again on No. 10 when he two-putted from 65 feet to keep the card flawless.

The only mistake came on the last, his lone bogey of the day. Carrying a five-shot lead, Berger went for it at the par-3 15th, the start of the three-hole stretch known as the “Bear Trap,” which golfers typically play more conservatively. Not Berger; he went at the flag, kept the ball below the wind, and watched it settle 7 feet from the hole.

The birdie putt was center-cut, getting him to 12 under — six shots ahead of the nearest challengers at that moment and basically putting the tournament away.

So, who is chasing Berger heading into the final round on Sunday? Sitting behind Berger at 6-under includes Shane Lowry (67), Chris Kirk (71), Sepp Straka (69), and first-round leader Kurt Kitayama (71). Of the group, Lowry has the best golf odds to win at +900, as projected by Jazzsports.

Kirk was the closest to Berger for a while, as he was just three shots back as he headed to the par-4 14th. But a trip into the trees led to a double-bogey, and Berger backed off his putt before coolly rolling in a 5-footer to save par yet again, leaving Kirk five strokes back, +1500 odds to win the tournament, as projected by Jazzsports.

The low round of the day was a 68, which came from Andrew Kozan, Curtis Thompson, Billy Horschel, and Kevin Streelman, but in all four cases, that simply meant just getting to even par for the week nowhere near Berger.

The Honda Classic Final Round Preview

Berger should coast to the hometown win this afternoon in Florida at the 2022 Honda Classic. Sure, he could fall apart, but he’s intelligent and experienced enough with a six-stroke lead that it’s going to be extremely difficult to run him down. The last seven leaders with at least a five-stroke lead going into the final round of a PGA Tour event have gone on to win

After Round 3 at the 2022 Honda Classic, Daniel Berger remains the strong favorite to win it all, as projected by JazzSports.

Join us to receive our daily Golf content and make sure to stay tuned for The Honda Classic R3 highlights, golf news, and PGA Tour schedule.