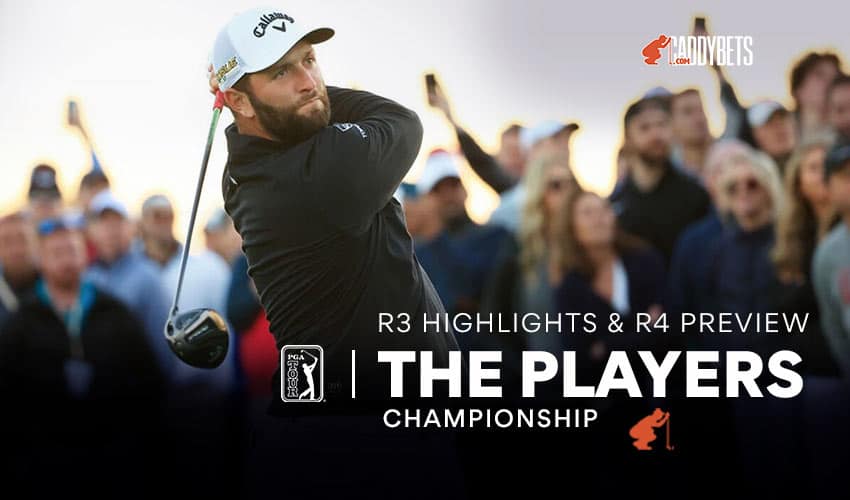 The Players Championship Round 3 Highlights & Round 4 preview

The one positive from all the rain that the TPC Sawgrass has seen this week is that the greens aren’t hard. The players are having a hard enough time landing the ball anywhere on the green, so if the greens were hard and fast, as TPC Sawgrass is known for, the scores would be even higher.

The Players Championship Round 3 Highlights

I must admit watching the golfers on the historic par-3 17th yesterday was about as riveting and exciting as golf can get. I found myself hanging on every shot and watching most of them either find the water or fly the green to almost roll-off, but somehow have enough spin as it hit the wooden supports to spin back enough to hang off the grass.

Watching the golfers yesterday, I’m sure it was anything but fun for them trying to navigate a damp course with dropping temperatures and 30 plus mile-per-hour winds.

With players trying to finish round one and then turning around and starting their second round on Saturday, there was actually a lot of golf to be played. So, who is leading this tournament?

Tommy Fleetwood, who only played three holes on Saturday, added a birdie to his total but eventually dropped a stroke and remained tied for the lead with Tom Hoge at six-under. However, Fleetwood is not the current favorite to win, as his odds are +1400, as projected by Jazzsports. The current favorite remains Jon Rahm at +700, as projected by Jazzsports, as he sits three strokes back at 3-under.

The odds for THE PLAYERS Championship for Sunday have been posted, and Jon Rahm has been inserted as the favorite, as projected by Jazzsports.