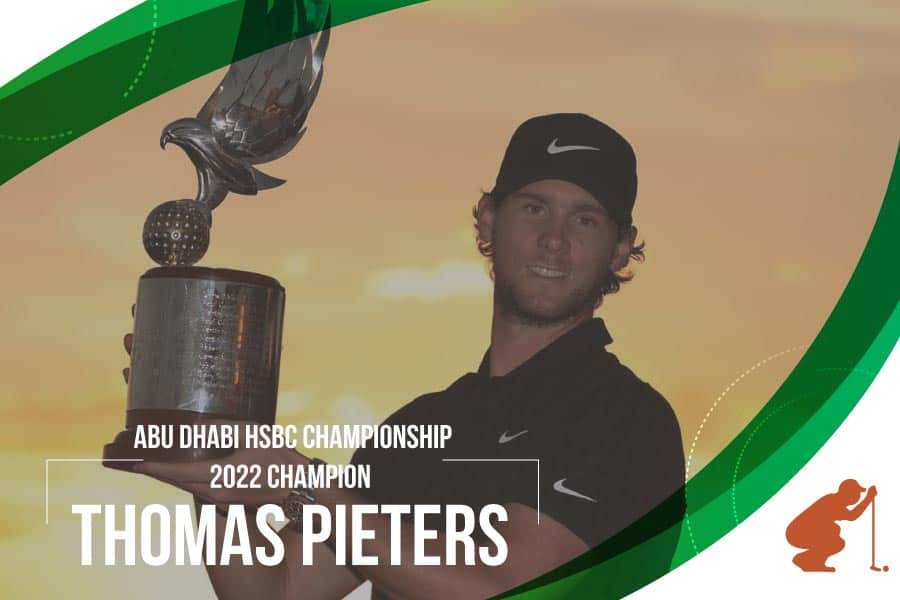 This tournament at Yas Links was in the Middle East, but by watching the action of Thomas Pieters at Yas Links, you would’ve thought it was along the sea in the United Kingdom.

Not only was Abu Dhabi HSBC Championship staged on a links course, but it had the weather to boot, with up to 30-mile-per-hour winds during the tournament. In true links fashion, Thomas Pieters shot an even-par 72 on Sunday, which was enough to over contenders like Viktor Hovland, Tyrrell Hatton, Ian Poulter, and Rafa Cabrera Bello.

Pieters, from Belgium, shot a 10-under 278 for the tournament and won for the sixth time on the DP World Tour and claimed his first Rolex Series crown—a series of events on the tour that contain higher prestige and payouts.

“Winning a Rolex Series, it’s as good as it gets in Europe. I want to play all the big tournaments, and hopefully, this gets me close,” Thomas Pieters said after the victory. “I feel like I’ve turned the corner, and I’m playing really good golf. I’m really in control of my ball flight, and it’s nice to feel like that and making putts as well. My putting has improved massively and I felt like that’s the thing that really kept me going on the weekend.”

Scott Jamieson led the event after each of the first three rounds, but Sunday was not his day, carding a 77 and finishing in 10th place.

For a brief period was Rory McIlroy, who needed a birdie putt on Friday to make the cut, and was two shots behind Pieters at one point after an eagle on No. 9, but he had three bogeys over the final five holes to finish tied for 12th.

“It wasn’t the finish I wanted, but big-picture wise, it was good to play another 36 holes and assess where everything is and know what to work on,” McIlroy commented following the tournament.

Cabrera Bello, who won the Open de Espana last fall, was tied for the lead briefly on Sunday before settling for a tie for second place after shooting a 69. Shubhankar Sharma was tied with Cabrera Bello at -9.

Viktor Hovland, who won in two of his last three tournaments—a PGA Tour event in Mexico and then the unofficial all-star-style event Hero World Challenge in the Bahamas—tied for fourth with Victor Dubuisson at 8-under. Hovland shook off a triple-bogey on the third hole to come within one shot of the lead before a double-bogey on 16 set him back.

Defending tournament champion Tyrrell Hatton shot a 67, which was the best round of the day, to finish tied with Ian Poulter, James Morrison, and Jeff Winther at 7-under. Hatton also finished second at the Alfred Dunhill Links Championship in October, making him a strong contender for this summer’s Open Championship at St. Andrews.

Join us to receive our daily Golf content, and make sure to stay tuned for Thomas Pieters updates, HSBC Champions, golf news, and PGA Tour schedule.