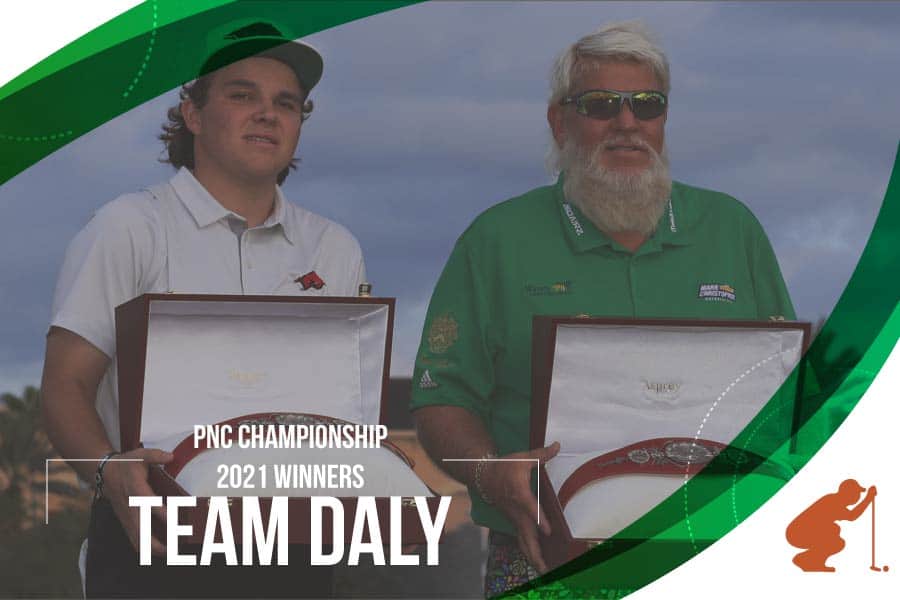 Two of the more popular golfers in the history of the sport did battle in a family-friendly exhibition that felt at times like a major with the amount of electricity that was going through the crowd at the Ritz-Carlton Golf Club in Orlando, Florida, for the PNC Championship.

Even though it was an exhibition, there was Tiger Woods in his Sunday red, racking up birdie after birdie, chasing after John Daly like it was 20 years ago. Woods, teaming up with his 12-year-old son Charlie, hit a tournament record 11-straight birdies, but the duo fell two strokes short against Daly and his son John Daly II, a golf standout at the University of Arkansas. The Dalys shot a 117, which was 27-under in the two-day event and a PNC Championship record.

Woods hadn’t played a competitive round of golf since a February car accident that left his leg severely injured—almost to the point where Woods said that amputation was a possibility. He said that he decided to play this event two weeks ago, and his son, able to play from the forward tees, helped the team off the tee, while Woods showed some sharpness in the iron game and with his putter on the green.

Team Woods at the PNC Championship

After shooting a 62 in Saturday’s opening round to sit three strokes behind Stewart Cink and his son, Team Woods started Sunday with two birdies and an eagle in the first three holes. After three pars, father and son rattled off 11-straight birdies to tie for the lead with Team Daly, who was playing two groups behind the Woodses. But when trying for eagle on the 18th hole, the Woods team both chipped too strong and had to settle for a par. At around the same time, Team Daly took the lead with a birdie on 16 and sealed the win with a birdie on 18 to win by two.

Woods, who is known as one of sports’ greatest all-time competitors, had never smiled more broadly after a second-place finish.

“The fact that I’m able to have this opportunity this year—even a couple weeks ago, we didn’t really know whether or not I would be doing this,” Woods said, “but here we are. And we had just the best time ever.”

As has been the case over the past 25 years or so, Woods impressed his fellow golfers with his play.

“I did not expect to see him have as much game as he’s got,” said Matt Kuchar, who was paired up with Team Woods on Sunday. “His irons were as solid as I remember, really well struck, high quality – I think he goes down as the greatest iron player of all time, and he’s still showing signs of that. Well-struck balls that all seemed to be pin high, as well. It was impressive.”

“The competitive juices—they are never going to go away. This is my environment,” Woods continued. “This is what I’ve done my entire life. I’m just so thankfully to be able to have this opportunity to do it again.”

Justin Thomas and father Mike, who were overwhelming favorites coming into the tournament at +145 after winning the event in 2020, finished tied with Team Cink for third at 24-under with back-to-back 60s. Team Woods was +900, which seemed like it didn’t hold much value given that no one knew what to expect from the 46-year-old, but it turned out to almost be a winning bet. Team Daly came in at +1000, mainly on the strength of the younger Daly, who certainly has a future in the game of competitive golf after he graduates.

Seeing Daly, the surprising 1991 PGA Championship winner in his first year on the tour, still going at age 55, smoking cigarettes, and fighting bladder cancer, was another sight to behold this weekend.

Following the victory at the PNC Championship, he talked about what keeps him going.

“I think it’s love for the game, but it’s also love for my son—to be able to play with him—and love for family. Whether we win or lose, I enjoy being out here competing [and] being on his team,” Daly said.

Team Daly was one shot behind the leaders coming into the day on Sunday after shooting a 60 in the opening round, but they also started birdie-birdie-eagle in the second 18 holes. After shooting an 8-under 28 on the front nine, the Dalys birdied the first five holes on the back nine, on their way to a 57 to notch the lowest score shot in this tournament by one stroke over Davis Love III and his son three years ago.

Back to Woods, he said that he will never play a full schedule again; he will instead pick and choose the events he plays—most likely majors and low-pressure events like this one. But what could be a sign of things to come as far as how Woods may compete in the future, despite his success on Saturday, he said that he felt like he only hit three shots exactly how he wanted to.

The PNC Championship invitation field consisted of 20 major winners and a playing partner—in most cases a father or son.

Behind the four groups who led the way, Team Lehman was tied for fifth with Team Singh, who finished runner-up a year ago. Team Kuchar was seventh and Team Stenson and Team O’Meara tied for eighth place.

We don’t know when we’ll see Woods next in his Sunday red shirt, but we do know that the PGA Tour will enjoy a holiday break over the next couple weeks, returning at the Sentry Tournament of Champions on The Plantation Course at Kapalua in Hawaii on January 6. The field, which consists of winners on the PGA Tour from the previous calendar year, is highlighted by World’s No. 1 golfer Jon Rahm, who committed to the event last week. It will be his first tournament since taking a break from the game after missing the cut at the European Tour’s Andalucia Masters in his home country of Spain back in October.

Sign up and make sure to stay tuned for PNC Championship updates, PGA news and PGA Tour schedule