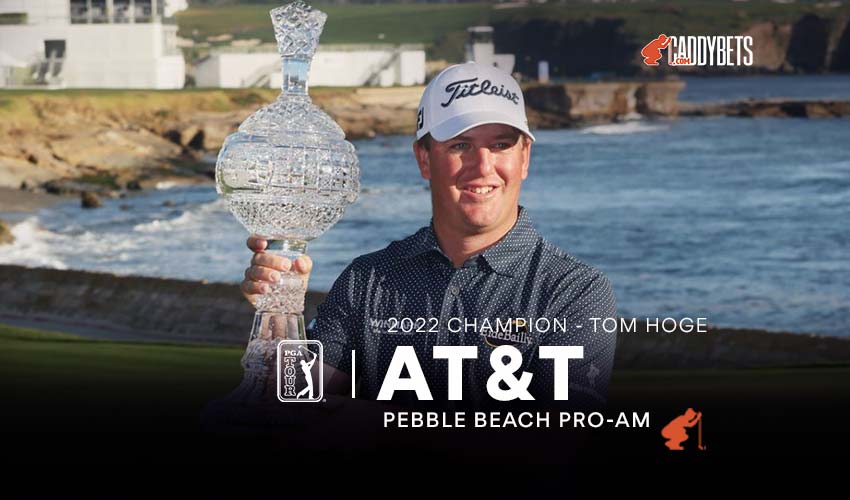 Tom Hoge started the AT&T Pebble Beach Pro-Am strong with a 63 on Thursday to take the early lead and held it throughout the weekend, emerging from a crowded leaderboard late to win the event by two strokes for his first PGA Tour victory in his 202nd event.

Hoge, who we identified as a potential longshot winner last week at +6000 odds, had shown signs that this might be coming. He’s been solid throughout his career at Pebble Beach, finishing 12th here last year. He missed the cut at the Farmers Insurance Open last week, but the week prior, he came in second place at The American Express. He was also fourth at The RSM Classic to close out the fall portion of the 2021-22 FedEx Cup season.

“It’s awesome; I’ve worked through so many hard times,” Tom Hoge said after the win on one of America’s most famous golf courses. “I’m almost a little in shock. It’s been so long since I won anything that I forgot how to celebrate.”

Hoge started the day tied for the lead and was among seven golfers to hold at least a share of first place throughout the day on Sunday. That group included Jordan Spieth and Patrick Cantlay, the defending FedEx Cup champion.

For a while, it appeared that it would be Spieth’s day after finishing second here a year ago. He was leading late but missed a short putt on No. 17 that resulted in a bogey and couldn’t muster more than a par on 18.

Meanwhile, after recording birdies on 11 and 14, Hoge almost holed out on No. 16 for eagle. A tap-in for birdie plus a birdie on the 17th put him in the lead for good. He finished with a 19-under 268 for the tournament after back-to-back 68s this weekend.

On the plus side for Spieth, it was his best finish by far this season, as his previous high was a tie for 18th at The CJ Cup at Summit in October. Like Tom Hoge, he missed the cut at Torrey Pines the week before.

Beau Hossler, who was tied with Tom Hoge for the lead going into Sunday, shot a 71 to finish three shots behind the leader at a 16-under 271. Cantlay ended up tied for fourth with Troy Merritt. The trio of Matthew Fitzpatrick, Joel Dahmen, and Andrew Putnam ended up sixth at 14-under. Seamus Power, who was leading the tournament at the halfway point, faltered with a 74 on Saturday and 72 on Sunday, leaving him in a tie for ninth (with Jonathan Byrd and Pat Perez) at 13-under.

Hoge moved up to second place in the FedEx Cup standings behind Hideki Matsuyama as the PGA Tour heads to Arizona this coming weekend for the Waste Management Phoenix Open at TPC Scottsdale. Matsuyama will be playing in that event, along with World’s No. 1-ranked golfer Jon Rahm and Viktor Hovland, who has won three of the last five tournaments he’s played in.

Join us to receive our daily Golf content and make sure to stay tuned for Tom Hoge updates, golf news, and PGA Tour schedule.