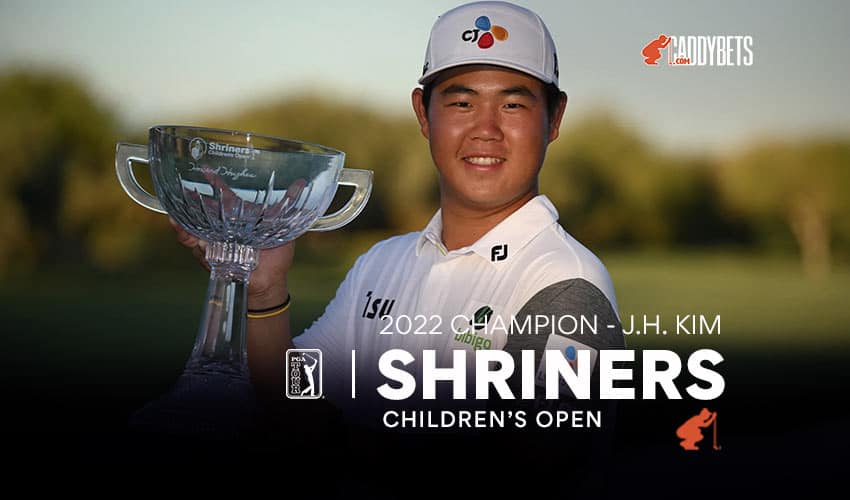 Tom Kim, the 20-year-old budding star from South Korea, is now a two-time winner on the PGA Tour after just 18 starts and is showing some nerves of steel along the way.

In August, he needed to win the Wyndham Championship in order to qualify for the FedEx Cup playoffs, and he did it—firing a 61 on Sunday when the pressure was on.

Sunday at the Shriners Open in Las Vegas, he entered the final round tied atop the leaderboard with Patrick Cantlay. Hole by hole, he stayed with the man known as “Patty Ice” right until the 18th hole.

That’s when Cantlay’s drive went left and into a desert waste area, settling against a bush. Kim’s drive, which followed, went right down the middle of the fairway.

Cantlay, needing an all-or-nothing miracle, tried to blast his second shot out but couldn’t make good contact and had to take a drop. That left him with a fourth shot that he needed to hole out from 163 yards to save par, but it went short and landed in the water.

In the end, it was a triple-bogey 7 for Cantlay, whereas Kim had an uneventful par to win the tournament by three strokes and tying the tournament record with a 24-under 260. With the win, Tom Kim became the first player since Tiger Woods to have multiple PGA Tour wins before turning 21.

“It’s really amazing,” Kim said after his victory. “A few months ago, I didn’t have any status in the U.S., and now being a two-time winner on Tour, having that place with Tiger, it’s an unbelievable feeling for me. It’s an honor for me, and it’s definitely a dream come true.”

Cantlay, who was also looking for his second win in the last two months after winning the BMW Championship in late August, had a bit of his shine taken off his week due to the errant drive on 18.

“I played well all week for the most part,” the 2021 FedEx Cup champ said. “One bad swing at the end. Obviously would have liked to have closed the deal out today, but sometimes that’s golf. The last hole makes the whole week kind of sour.”

After the victory, Tom Kim celebrated with fellow South Koreans Sungjae Im (who won this event last year and shares the course record with Kim), S.H. Kim, and K.H. Lee after forging a bond at the Presidents Cup two weeks ago. It was a snapshot of the rise of South Korean golf, which Kim plans on continuing while remaining humble.

“I’ve still got a long way to go, and I want to hopefully have a long career on the PGA Tour,” he said. “I’ve got a lot of work to do. I still need to get better at golf, and there are a lot of guys out here who have had a lot more success than me, so I’ve got to learn and I’ve got to keep playing better.”

Three other South Koreans were in the top 10: S.H. Kim at fourth, Im at seventh, and Si Woo Kim at eighth. Matthew NeSmith tied Cantlay for runner-up, while Tom Hoge and Mito Pereira tied S.H. Kim for fourth.

The South Korean contingent, led by Kim and Im, head to Japan with the rest of the PGA Tour for the ZOZO Championship this coming weekend. The defending champion is Hideki Matsuyama, and U.S. players with Japanese heritage, namely Collin Morikawa and Xander Schauffele, will be joining him.