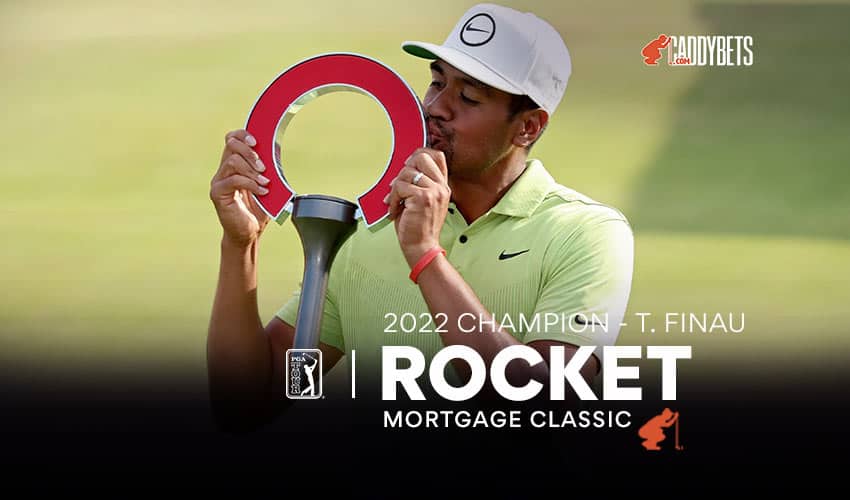 Tony Finau had a long drought between his first and second wins of five years, and now between wins three and four, he experienced the other side of that, going back-to-back in winning the Rocket Mortgage Classic after winning the 3M Open last week.

What Finau did do differently was close out a tournament in strong fashion. This was the sixth time he went into the final round of a tournament with at least a share of the lead, and for the first time, he ended up winning.

Coming into Sunday at Detroit Golf Club tied with Canadian Taylor Pendrith, Finau shot a 5-under 67 to win by five strokes over Pendrith, Patrick Cantlay, and Cameron Young. In the process, Finau set a tournament record with a 26-under 262 total.

“I’m very optimistic,” Finau said. “I’ve always been that way. I’ve always had hope and faith that things will turn out if I just keep working hard and putting myself there.”

After the five-year winless streak, Finau now has three wins in the past 12 months, including a win at The Northern Trust last year, which was the first FedEx Cup playoff event.

“I’m proud of the way I’ve fought through adversity in my career,” said Finau. “They say a winner is just a loser who kept trying, and that’s me … but one thing I won’t do is give up, and I’m only here as a winner because I chose not to give up and just keep going.”

Finau started his Sunday with three birdies in the first 10 holes and a key par-saving putt on No. 9. He recorded his first bogey of the tournament at No. 11, but he followed it up with a 31-foot birdie putt on 12 to pull away.

Pendrith fell short of getting his first-career win but did get a career-best runner-up finish after shooting an even-par 72. Cantlay, the defending FedEx Cup champion, finished with a 66 on Sunday to tie Pendrith, and Young, the Rookie of the Year front-runner, has an incredible five runner-up finishes this season—including two in a row after finishing second at the Open Championship two weeks ago.

“I’d be lying if I said it was easy to just watch other people win,” Young said. “Obviously, today Tony beat us all by a lot. I wasn’t that close; Finau put on a show.”

Cantlay seems poised to defend his title in strong fashion once the playoffs begin in two weeks. While he only has one win this year (with Xander Schauffele in the team event Zurich Classic of New Orleans), he now has three straight top-10 finishes and top 14s in nine of his last 12 tournaments, including the win and two runner-ups.

The Wyndham Championship is the final regular-season event before the 125-man FedEx Cup playoffs begin. Kevin Kisner is the defending champion after outlasting five others in a playoff last year. Will Zalatoris is the highest-ranked player in the field.

Join Us to receive your daily golf content! Make sure to stay tuned for the latest PGA GolfOdds,