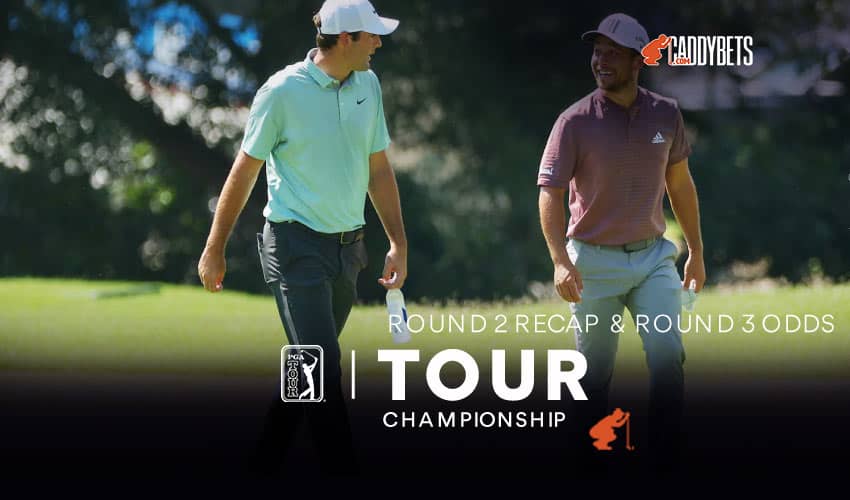 Tour Championship Round 2 Recap & Round 3 Odds

Heading into the second round of this year’s Tour Championship there was a real concern that the tournament could be over before it began with world number one Scottie Scheffler holding a five stroke lead over his nearest challenger. Here our Tour Championship Round 2 Recap and Round 3 preview & odds!

However, as this tournament has proved time and time again, it’s very much a case of game on as both Jon Rahm and Xander Schaufelle have thrown themselves into contention following excellent displays in the second round.

The enigmatic Spaniard has had a disappointing season by his own lofty standards just picking up the one title in Mexico. Heading into this year’s championship flying firmly under the radar, Rahm announced himself with a stunning -7, 63. It could have been better had it not been for a dropped shot on 17. Finally getting the putter hot, Rahm will start today’s third round three strokes off the lead.

A single stroke ahead of Rahm will be Xander Schaufelle. As we stated in yesterday’s recap, there has been no finer golfer in recent months than Schaufelle who has picked up titles in both the States and Europe. His ball striking has been electric and he has produced some wonderfully consistent golf. Despite dropping a shot on his third hole, six birdies and an eagle at the last would follow. Schaufelle started round 2 five behind Scheffler, now his deficit is only two.

So what about Scheffler?

For fans of the Texan there really isn’t too much to worry about. Despite his lead slipping from five strokes to two, the American still played well in his second round, keeping his scorecard clean on his way to recording a -4, 66. His round could have been better had he got some crucial putts to drop, but he will still firmly believe that he is the man to beat.

Although the tournament now looks a three way contest between Scottie Scheffler, Schaufelle and Rahm, a special mention must be given to Max Homa who shot the round of the week with a stunning -8, 62. Despite his heroics he will start the day ten strokes off the lead.

With the gap between Jon Rahm in third and Patrick Cantlay in 4th being four strokes, it looks like the winner of this year’s Tour Championship will be between the trio of Scheffler, Schaufelle and Rahm.

Of the three at the top of the leaderboard, the value play has to be Rahm at +1200. Following his second round display, he will be carrying some serious momentum into today’s third round and he will firmly believe that this title is firmly within his grasp.

Despite such a dominating year where he has won four times, world number one Scottie Scheffler will be concerned that his lead is now just two strokes. He is still playing well but considering the form of both Rahm and Schaufelle odds of -125 still look a little skinny.

Of the three at the top of the leaderboard it’s only Xander Schaufelle who is yet to taste major success. An Olympic Gold medalist, he will be looking to rival that success with victory over the weekend. Everything about Schaufelle’s game looks to be in a great place and his current odds of +165 could look vastly overpriced if he has yet another good showing today.

Patrick Cantlay +2500 will still harbour hopes of winning consecutive FedEx Championships but will need to get the putter firing quickly if he is to significantly eat into the seven shot deficit he currently faces.

The long shot of the day could be Rory McIlroy. The Northern Irishman will start his third round nine behind Scheffler but can blitz his way around this course. If he can get on a roll, odds of +6600 could look vastly overpriced by the end of the day.

Follow us on Social Media for more 2022 Tour Championship Round 2 update & check the Official World Golf Ranking, and more!