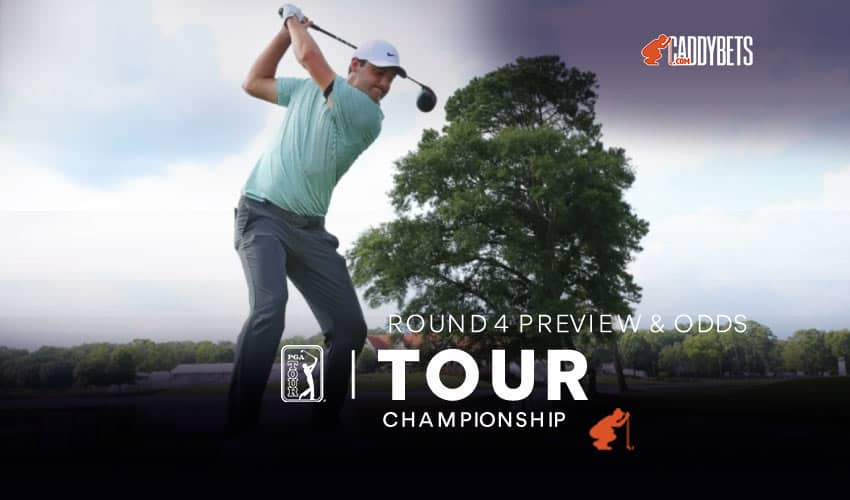 Spectators heading to Eastlake for the final round of this year’s Tour Championship will see more golf than they originally expected due to the third round being delayed by lightning. With storms in the area, yesterday’s third round was delayed and the delayed start meant the leaders were unable to complete their third rounds. But here’s all you need to know for the Tour Championship Round 4!

The tournament is intriguingly poised and everything is set up perfectly for a dramatic final day.

Still leading the way is world number one Scottie Scheffler but his lead has been steadily eroded and he now only leads the field by one. Scheffler has been playing steady golf but can’t quite get the crucial putts to drop. With his rivals putting on the pressure, the big-hitting Texan would have been pleased with the surprise opportunity he has been given to regroup.

Xander Schaufelle has slowly eaten into the five-stroke deficit he faced at the start of round 2, and now halfway through round 3 finds himself just a single shot behind. Schaufelle is looking to win the biggest title of his career and had it not been for consecutive bogeys on his front nine he could have restored parity.

Schaufelle seems to have handled the occasion brilliantly and is giving himself plenty of opportunities for birdies and eagles. If he can eradicate the odd silly mistake, Schaufelle can take this tournament right down to the wire.

Making a surge during round 3 was Sungjae Im. Im is the Ironman of the Tour, easily having played the most tournament golf this year out of the entire 30-man field.

There have been signs that Im has been close to playing his best golf in recent weeks but too many errors have cost him several chances of winning tournaments.

A birdie machine, Im picked up 5 shots over a span of four holes and finds himself bang in contention. The South Korean finds himself three strokes behind Scheffler and will be looking to make further inroads before his third round comes to close.

A man who knows how to win around Eastlake is Rory McIlroy and the Northern Irishman is once again in contention following a stunning third-round performance. McIlroy has two holes of his third round still to play and is currently just four behind Scheffler. Conditions should be perfect for McIlroy and it wouldn’t be a surprise if he was the man to post the score that everyone else had to beat.

Behind the four leaders are a quartet of players who sit on -14 and are five shots behind Scheffler. This group includes Patrick Cantlay, Jon Rahm, and Justin Thomas. All have played brilliant golf in round three to sit within striking distance of the leaders and it would be foolish to discount any of them from making a move during this final day.

Sign up and receive the best bonus! and make sure to stay tuned for more Tour Championship Round 4 updates, Golf News, and PGA Tour schedule

Follow us on Social Media for Golf Odds and more!