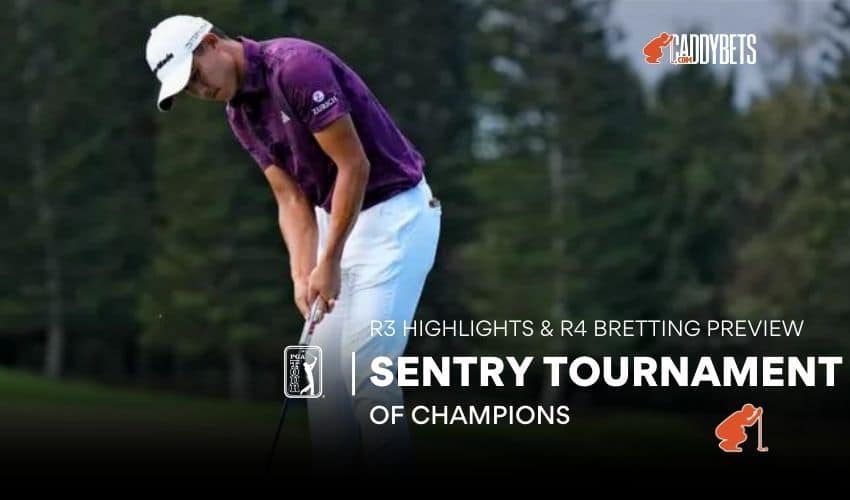 Tournament of Champions 2023: Round 3 Recap

Round 2 leader Collin Morikawa continued his charge to victory in yesterday’s third round at the Sentry Tournament of Champions 2023. Starting the day at -16 and two strokes clear of his nearest rivals, Morikawa showed just why he is regarded as one of the best players in the world with a stunning 64, to sit on -24 and stretch his lead to six shots. With the promise of more low scoring today, this tournament really is the Americans to lose.

After a tough 2022 where Morikawa rarely troubled the top of the leaderboard, this week has seen a resurgence and Morikawa is showing why he is a two-time major winner. The American’s ball striking has been on another planet this week and the American is yet to drop a shot through his first 54 holes.

Yesterday’s third round started slowly with Morikawa posting solid pars through the first four holes but his round would spark to life on the accessible par 5 fifths. With his rivals starting to close, Morikawa held his nerve to hole a crucial eagle putt, having created some separation from the rest of the field, more birdies would follow on the sixth and ninth before he would finish his day by recording birdies in four of his five closing holes.

The putter has remained electric through the first three rounds and with a six-shot lead heading into today’s final round, Morikawa knows that par golf will probably be enough to get the job done.

Matt Fitzpatrick makes his move, will start six shots off the lead

Matt Fitzpatrick made the most of some ideal scoring conditions as the Englishman posted a bogey free round which contained seven birdies to vault himself into a share for second place alongside Scottie Scheffler and J.J Spaun. Currently ranked at 9 in the world, Fitzpatrick will harbor serious hopes of adding to his major haul this year and will do his best to put some serious pressure on Morikawa today.

It isn’t surprising that with a six-shot lead, Collin Morikawa is the heavy favorite to win this year’s Tournament of Champions. Morikawa’s odds of -800 don’t really represent any sort of value, so it might be worth taking a chance with some other names in the field.

Despite a frustrating third round, Scottie Scheffler retained his spot in second and is today’s second favorite. Scheffler’s approach game let him down when he needed it most yesterday and it will have to be dialed in today if he is to overhaul Morikawa’s lead.

Matt Fitzpatrick has worked his way into contention following his stunning third-round performance and the defending US Open champion will believe he can make a run for what would be his first standard PGA Tour win. Fitzpatrick will need to dial up the aggression if he is to climb further up the leaderboard and he will be hoping to build on his positive momentum from yesterday.

With such established names around him, J.J Spaun’s golf has largely gone unnoticed this week, but the American has played some superb golf and has been in the top five since the first round. At +5000 he is undoubtedly the value play of the day considering how well he is striking the ball currently.

After leading round 1, Jon Rahm had a poor second round which saw him tumble outside the top ten. Rahm was back to his best yesterday and will start the day seven strokes behind Morikawa. While a win looks unlikely, Rahm has shown in the past he can be a birdie machine and could still be a viable betting option.

Sentry Tournament of Champions 2023 Round 4 Odds courtesy of JazzSports

Follow us on Social Media for more Tournament of Champions 2023 updates!