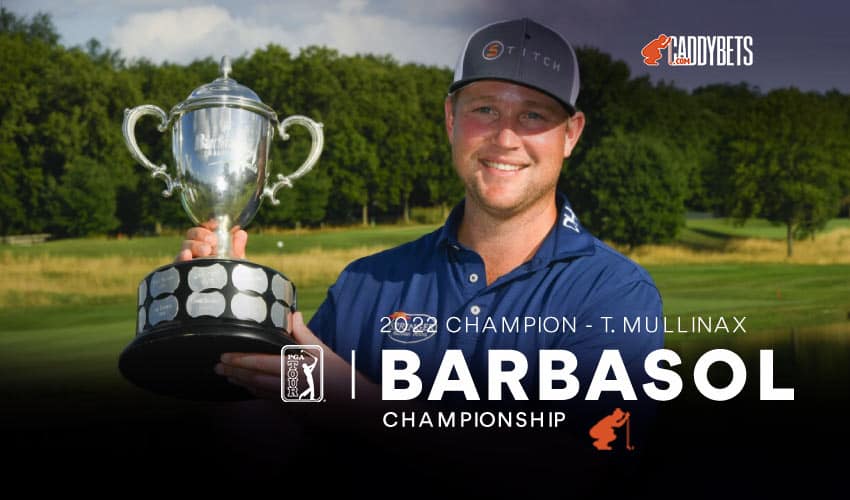 Trey Mullinax is the 2022 Barbasol Champion

Mullinax Birdies Final Hole to Win Barbasol Championship and a Spot at St. Andrews After 33 Holes of Golf Sunday

Sunday was quite the day for golf fans—in addition to the Genesis Scottish Open taking place in the morning hours for those watching in the U.S., a spot in the Open Championship was on the line at the 2022 Barbasol, and because of rain earlier in the event, most golfers had to play nearly two rounds on the final day.

When the dust settled, Trey Mullinax birdied the 18th hole (his 33rd of the day) on a 15-foot putt to take the lead by a stroke and then claimed his first PGA Tour win when Kevin Streelman’s birdie attempt missed to the right.

After playing most of his third round at a 5-under 67, Mullinax shot at 6-under 66 on Sunday to end up at 25-under par for the tournament.

“I stayed focused for 72 holes,” Mullinax said. “I missed a couple of opportunities with the putter and just told myself to keep putting, been putting great. Been hitting my irons beautifully all week, probably the strongest part of my game. I knew I was going to have that shot a couple of times, and I hit a great shot at the right time.”

Mullinax, 30, won in his 106th career start. The 2022 Barbasol only paid out 300 FedEx Cup points because it was a companion event to the Scottish Open this weekend, Mullinax gets his share of spoils—including a berth into this week’s Open Championship at historic St. Andrews in Scotland. He also receives exemptions into the 2023 PGA Championship, Players Championship, and Sentry Tournament of Champions.

“What a dream come true to be able to go to St. Andrews on the 150th and be able to play,” Mullinax said. “I’ve got a lot of logistics to take care of in just a little bit, but super excited and ready to go over there and try and figure out that golf course.”

Streelman’s putt going wide on 18 left him out of a potential playoff and a trip to Scotland, so the event was not short on drama.

“I’m frustrated I hit two incredible shots there the last two holes and hit two good putts,” Streelman said. “One of them went, one of them didn’t.”

Matti Schmid started the day in the lead but a final-round 77 dropped him down to a tie for eighth with Sean O’Hair, Marcus Helligklide, Ricardo Gouveia, and Justin Lower. The field was made up of PGA Tour and DP World Tour pros in a co-sanctioned event as part of the two tours’ “strategic alliance.”

Finishing in third was Mark Hubbard at 22-under, Hurly Long was fourth, Vince Whaley fifth, Adam Svensson sixth, and Michael Kim seventh ahead of the large group tied for eighth.

The 150th Open Championship, the final major of 2022, tees off at St. Andrews on Thursday. Scottie Scheffler, Justin Thomas, and Matt Fitzpatrick were all on hot streaks when they won the year’s earlier majors, so that bodes well for Xander Schauffele, who comes in having won his last two tournaments. Tiger Woods is also playing in this event as is Collin Morikawa, the defending Open champion.

Follow us on Social Media for 2022 Barbasol & Official World Golf Ranking, and more!