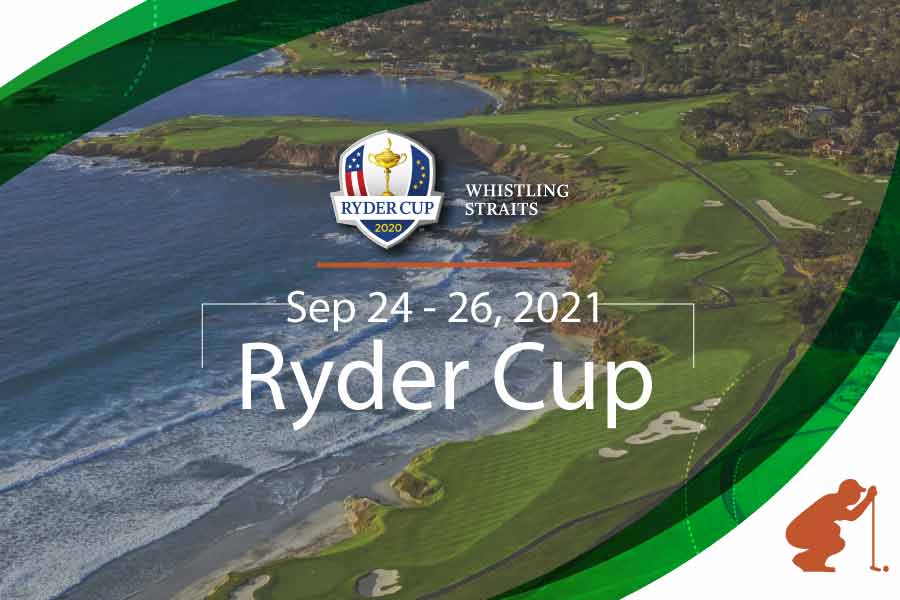 Anticipation is high for one of the most entertaining golf tournaments on the schedule, and to build the suspense even more, we’ve had to wait an extra year for the Ryder Cup 2020 to return. But the competition between the U.S Team and Europe Team is on for this Friday through Sunday at Whistling Straits in Sheboygan, Wisconsin.

The Straits Course, opened in 1998, is a links-style course that has some massive length to it. It’s a par-72, 7,790-yard track that favors big hitters and, while it is not a regular stop on the PGA Tour, it has hosted some big events. The PGA Championship has been contested here three times (2004 with Vijay Singh winning, 2010 with Martin Kaymer victorious, and Jason Day won the most recent one in 2015). The 2007 U.S. Senior Open was also here, which was won by Brad Bryant.

The course is on Lake Michigan and exposed to wind and other elements, giving it a truly Scottish The Open Championship style feel. Eight of the holes border the lake.

After a tough round, the 18th hole provides a major challenge, as it’s a 520-yard par 4, which is the longest par-4 on the course.

This is the 43rd Ryder Cup

This is the 43rd Ryder Cup, and while the U.S. team has the most wins overall, they have won just one time in the past five tournaments and only twice in the last nine. The European team won in Paris in 2018 rather easily by a score of 17.5-10.5. This year’s event was scheduled for 2020 (and still carries the 2020 name), but it was postponed by one year due to the COVID-19 pandemic. All future Ryder Cups will also move forward by a year, so the next one will be played in Italy in 2023.

Captain Steve Stricker has put together a team that’s filled with nine of the top 11 golfers in the Official World Golf Rankings. Four of those nine are also playing in their first Ryder Cup, so Stricker is hoping that since so many of the big stars on this team doesn’t have a history of losing to the Europeans, they will not be intimidated or not be big enough for the moment.

Overall, oddsmakers are favoring the U.S. team’s talent and home-field advantage, as they are -220. Team Europe, an experienced squad that will not be intimidated by playing on the road, stands at +200. You can also bet that the teams will be tied after the three-day competition, and that would pay +1000.

For strategy, the European team generally gets off to a good start in the team format over the first two days, so if you plan on betting them, it’s best to do so now before the competition begins. Similarly, the odds on the United States team may come down a bit and be more favorable to the bettor if they get off to a slow start.

As for the players, which you can bet on individually as to who will have the best score either just on their team or combined between the two, Dustin Johnson is ranked second in the world and is playing in his fifth Ryder Cup, so he is the most experienced member of the team. He also finished fifth and eighth at the last two PGA Championships held at Whistling Straits. We will list their odds of scoring the most points between both teams overall, and Johnson sits at +1100.

The biggest hitter in the field is Bryson DeChambeau, so the length of the course should suit him, but he’s been a bit inconsistent this year, and that’s reflected in his odds of +1600 to be the overall points leader. If you’re looking for a safer bet, Xander Schauffele (+1300) is also a monster off the tee and won a gold medal the last time he was representing the United States—at the 2020 Tokyo Olympics last month.

On the European side, Jon Rahm is the overall favorite for high points-getter at +800. The world’s top-ranked golfer has also been on a tear for much of this year, leading the Memorial by six strokes before he needed to withdraw due to a positive COVID-19 test, winning the U.S. Open, leading for much of the way at The Northern Trust last month, and finishing second (but tying for the best score on the course) to Patrick Cantlay at the Tour Championship—Cantlay had a four-stroke head start over Rahm based on the FedEx Cup standings heading into that event.

Speaking of Cantlay, he won his last two events on the PGA Tour and is +900. We’ll see if the three-week break since the Tour Championship cooled him off at all.

It also helps a golfer’s chances to win high points if they play all five possible matches over the course of the weekend, and Europe’s Rory McIlroy (+1000 has played in 24 of a possible 24 matches in his Ryder Cup career. He’s also a big hitter, and the Northern Irishman will feel right at home on the links-style course.

Looking further down the list, Viktor Hovland could be worth a flier at +1600. The 24-year-old is the first Norwegian to make the Ryder Cup team and won twice on the PGA Tour in 2020 along with a win at the BMW International Open in June on the European Tour. He’s strong off the tee and has one of the best iron games on either tour.

Here are the latest odds from Jazzsports for the winner of the 2020 Ryder Cup along with two prop bets that are available.

Follow us on Social Media for instant Ryder Cup 2020 updates!