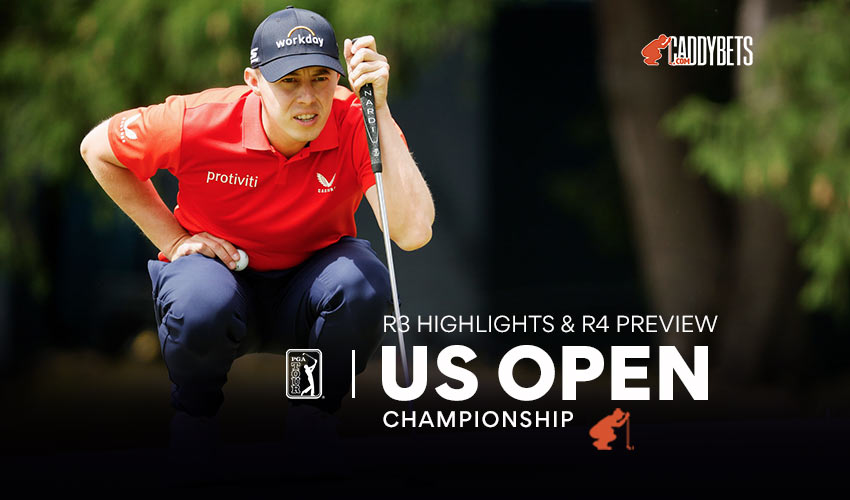 US Open Round 3 Recap and Round 4 Preview

Day 3 of this year’s US Open will live long in the memory. Played amidst high winds and firm conditions, the awesome Brookline course tested the player’s abilities from start to finish. Here is our US Open Round 3 Recap.

In such difficult conditions, the leaderboard was a constant sea of change.

US Open Round 3 Recap: Morikawa’s downfall

Starting the day in the lead were the American duo of Collin Morikawa and Joel Dahmen. Both held a one-stroke lead, but the lead didn’t last long. Dahmen started his day scoring two bogeys in his first four holes, he would go on to shoot +4 for his front nine, but battled back well on the back 9 finishing -1 and in a tie for seventh.

Morikawa, who has won both of his majors when leading after two rounds were steady through his first three holes. Disaster then struck on the fourth when an errant drive found the thick rough and he would record his first bogey of the day. Further bogeys would follow on 6, 12, and 15. Worse was to come with double bogeys on the 7th and 13th. It was a tough day at the office for the young American who finished the day +7 and back in a tie for 17th.

US Open Round 3 Recap: Zalatoris had a great day

The best round of the day easily belonged to Will Zalatoris. Zalatoris who lost in a playoff to Justin Thomas at the US PGA admitted that he played some of the best golf of his career to finish the day -4 and in a share of the lead.

Zalatoris is joined at the top of the leaderboard by Matt Fitzpatrick. As we flagged in yesterday’s review, Fitzpatrick loves this course, he won the US Amateur here back in 2013. Only a bogey at the last was enough to prevent him holding the outright lead and he looks primed to play a leading role today.

Within three strokes of the lead are the likes of John Rahm -3, Scottie Scheffler -2 and Rory McIlroy -1. With all three having serious major credentials, they will be expecting to put serious pressure on the top two.

Leading the golf betting are the duo of Fitzpatrick and Zalatoris who are priced at +250 and +350 respectively. A one-shot lead doesn’t really count for anything, but both head into today with something to prove. Fitzpatrick knows this course, like the back of his hand and where par golf could be enough to bring the trophy home, he could be the safest pick out of any player left in contention.

Zalatoris will want to get over the line having come so close at the US PGA. If he can play anywhere near like he did yesterday he will be in with a real chance.

Jon Rahm was putting together an excellent third round and would have held the outright lead had it not been for a double-bogey at the last. Rahm would want nothing more than to defend the title he won last year and at +400 he looks to be the main danger to the leaders.

Keegan Bradley currently sits at -2 and finds himself just two strokes behind the leaders. A Boston native, Bradley has swathes of support and he seems to be reveling in both the occasions and conditions. Nobody is really talking about the American but golf betting odds of +1400 could be the value bet of the day.

In what is sure to be a wild day, betting the field at +300 certainly isn’t a bad option. Players like Dustin Johnson, Hideki Matsuyama and Collin Morikawa are all within six shots off the lead. If anyone can finish their rounds at -3 or -4 they will be in with a really good chance of winning.

Follow us on Social Media for US Open Round 3 & Round 4 preview updates & Official World Golf Ranking, and more!