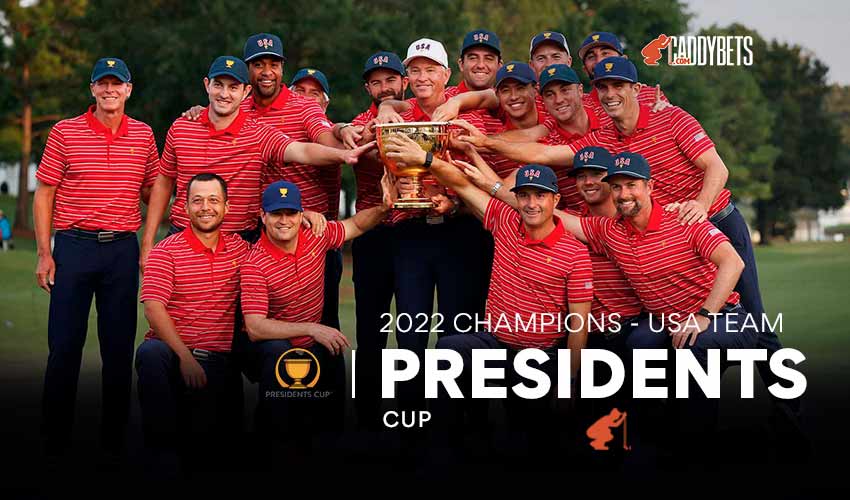 The heavily favored United States team got off to a hot start—as expected—in the first two days of President’s Cup competition against an International team featuring eight rookies, but the gap closed to just a four-point lead after the Internationals went 3-1 in Saturday’s fourball competition.

The gap was looking to close even further midway through action Sunday at Quail Hollow in Charlotte, North Carolina, as the International team was faring particularly well halfway through the 12 singles matchups.

But Tony Finau and Max Homa came back to win their matches, and Xander Schauffele held off a hard-charging Corey Conners to win his match and provide the winning points for the U.S. team, logging a 17.5-12.5 victory on Sunday to win the competition for the 12th time in 14 editions of the event.

“It’s always hard to win, Schauffele said after hitting the winning putt. “It was close. It was stressful. And what you saw there was a big sigh of relief.”

Jordan Spieth led the way for the Americans, beating Cam Davis 4-and-3 in a singles match to go 5-0-0 in the tournament and be named the MVP.

“My wife Robin said, ‘Who is that kid?’” team captain Davis Love III recalled this week of a then-20-year-old Spieth, who has been a consistent member of the U.S. team for a decade now. “I go, ‘That’s the future of our team right there.’”

Homa, who won the PGA Tour season-opening event last week in Napa, California, was an impressive 4-0-0 as a rookie in U.S. team competition.

“It’s been amazing to watch these 11 other guys who are incredibly good, incredibly acclaimed, so many accomplishments, cheering us on coming down the stretch,” Homa said. “I’ve been in the last match both days, and to be able to see that is special for me.”

The International team had eight rookies but played remarkably well, especially after falling behind early in the competition. Players like Cameron Smith, Joaquin Niemann, Marc Leishman, Louis Oosthuizen and others were expected to play but weren’t eligible after joining the LIV Golf circuit, setting Trevor Immelman’s team a bit behind the eight ball.

“We were in a tough spot on Friday. We showed a lot of guts to fight back. At some point this afternoon, I thought there was still a chance. This team is no joke, and I’m sick and tired of it being spoken of as a joke,” Immelman stated firmly after the play on Sunday wrapped up.

Justin Thomas also had a chance to go 5-0-0, but he lost his singles match to Si Woo Kim, who made a shushing motion to the crowd after holding serve on hole 15 on his way to winning the match 1-up.

“Honestly, at the time, I was pretty pissed off,” Thomas said of the shushing. “It’s one of those things, I think when you’re in the moment, when you’re on the other side of it, it’s something that gets you motivated, gets you pumped up a little bit.”

Team competition resumes next fall for the Ryder Cup, where the U.S. team will face a European contingent in Italy. Meantime, the PGA Tour resumes with the Sanderson Farms Championship in Mississippi. U.S. team member Sam Burns is the 2021 champion and will be in Jackson to defend his title.