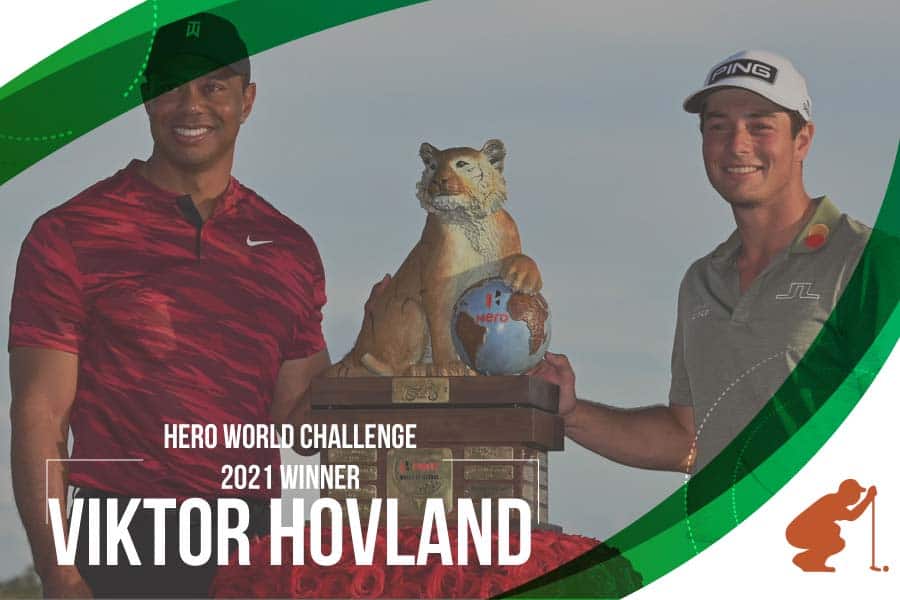 Collin Morikawa was in position to finish his outstanding 2021 on a high note by keeping his five-stroke lead he earned on Saturday and cruising to a Hero World Challenge 2021 victory in front of Tiger Woods, the golfer who many are comparing the 24-year-old Asian-American in the same breath as the way the now 46-year-old Woods dominated the elite golf world in the late 1990s and early 2000s.

But Morikawa shot a four-over 76 on Sunday, finishing tied for fifth at 14-under and opening the door for several challengers. Viktor Hovland emerged from that group of challengers with a six-under 66 to win the Hero World Challenge 2021 by one stroke over Scottie Scheffler. It’s not an official PGA Tour win, but it’s the second victory for Hovland this fall after winning the World Wide Technology Championship at Mayakoba last month. In addition to a $1 million prize for the Norwegian, the event does pay Official World Golf Ranking points, and Hovland is now up to seventh in the world.

So in the end, a 24-year-old rising star in the world of golf did get to pose with Woods at the trophy presentation, but it was Hovland instead of Morikawa.

“I didn’t think a win was going to be very possible,” Hovland said about his thoughts coming into the day on Sunday. “But I know this course is tricky. You can make birdies, but it’s easy to make bogeys and doubles. If I put a good score up there, you never know what’s going to happen.”

The winning moves by Hovland came on holes 14 and 15, where he hit back-to-back eagles on the par 4 and 5 holes, with the one on 14 being particularly impressive by holing a bunker shot, and he followed that with a birdie on 16. He was able to play the final two holes conservatively, bogeying both, and still won by a stroke.

Hovland, who was roommates with Morikawa this week, had seen the hot streak that he had been on (including a win at the DP World Tour Championship, Dubai in the European Tour finale) and figured he would’ve cruised to a victory, or the best-case scenario would’ve been a showdown between the two young competitors.

“A little sad to see [Morikawa] not play his best today,” Hovland remarked. “He’s a great player, and I expected him to just kind of roll away with the victory. But sometimes, this sport is not that easy, and I’m sure he’ll come back even stronger.”

A Rare Blemish for Morikawa

After he amassed a five-stroke lead after a 64 on Saturday, Morikawa told the media that it wouldn’t be a sure thing that he could finish things off on Sunday due to the nature of the course at Albany Golf Club in the Bahamas.

“This course, if there’s a lot of wind, a lot of guys out here can make a lot of birdies early on… Nothing’s going to be a gimme tomorrow,” Morikawa said late Saturday.

Two double-bogeys in a three-hole stretch led to a 41 on the front nine, and he had two birdies early on after the turn, but he couldn’t get any closer and bogeyed 18 to finish with the 76.

Morikawa also would’ve been able to overtake Jon Rahm at the top-spot of the Official World Golf Rankings if he would’ve been able to win. The 2021 Open Championship winner and the first-ever American golfer to win the season-long Race to Dubai title on the European Tour would’ve been the second-youngest player to rise to No. 1—behind Woods, of course.

Sam Burns, second in the current FedEx Cup standings and perhaps the most consistent golfer in the fall portion of the PGA Tour 2021-22 season, finished tied for third with Patrick Reed at 15-under. But Burns easily could’ve won the event if it wasn’t for the 14th, a drivable par-4 hole.

Burns got to that tee tied for the lead, and his drive landed in some grass short of the green. A chip-in for eagle was possible, and it seemed like a birdie would be the worst-case scenario. Burns, however, hit the false front of the green with the ball rolling back. But this didn’t happen once. He chipped it five times before the ball stopped on the fringe, and he putted from there for a triple-bogey seven on the hole.

To his credit, Burns, who tossed his ball away after sinking the putt for the seven, didn’t let it affect him on the next hole, as he eagled the par-5 15th. The finished par, birdie, par for a 69 on the day.

Jordan Spieth and Henrik Stenson were playing partners and were the first group out on Sunday. They went from the eighth green to the ninth tee and hit their shots. They were then informed that they hit off the wrong tee box and were each assessed a two-stroke penalty.

Tournament officials warned players that the tee boxes on the ninth and 17th holes may change to make it easier for players to reach No. 9 in two. That change was made, but they didn’t realize it. If the two completed the hole, they would’ve been disqualified.

In a humorous response, since the two were in 19th and 20th place out of the 20-man field, Stenson asked if they could finish the hole and leave after nine, but that wasn’t allowed either.

Reed’s third-place finish was his third top-three result in six tries in this event at the Albany course. Justin Thomas tied Morikawa for fifth while Tony Finau and Dnaiel Berger tied for seventh at -13. Englishmen Justin Rose and Tyrell Hatton tied with Brooks Kopeka for ninth at -11. Kopeka was playing well with three rounds in the 60s but ended with a 74 on Sunday. Round-one leader Rory McIlroy was at -6 after the opening round but finished the final three rounds at a combined even par to finish 18th. The PGA Tour wraps up 2021 next week with the QBE Shootout in Florida—another unofficial money event that pairs up golfers in teams of two. Matt Kuchar and Harris English return to defend their title.

Sign up and make sure to stay tuned for Hero World Challenge 2021, golf news and PGA Tour schedule