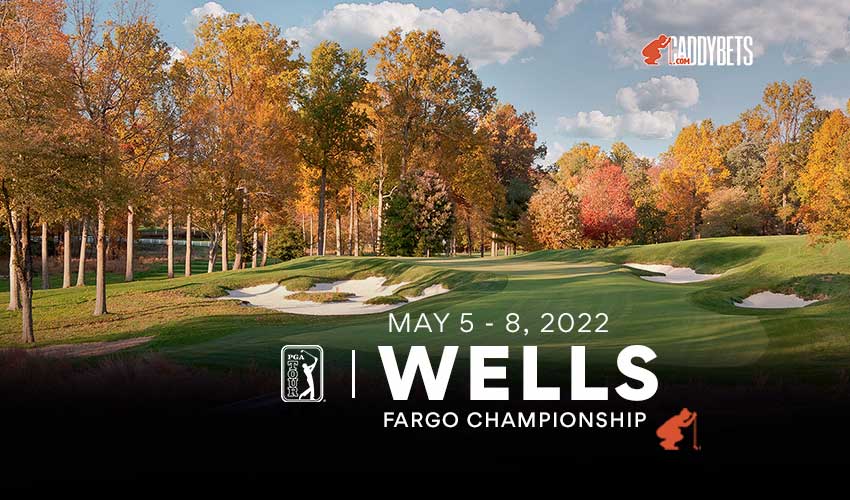 Rory McIlroy is the defending champion of the Wells Fargo Championship, but the scene shifts from the tournament’s home of Quail Hollow Club near Charlotte, North Carolina to TPC Potomac at Avenel Farm in Maryland due to Quail Hollow hosting the President’s Cup this fall.

This will be the second time since the tournament’s inception that it won’t be played in Charlotte (it was contested in Wilmington, NC in 2017 due to Quail Hollow hosting the PGA Championship). The tournament began in 2003, and McIlroy is not only the lone multi-time winner of the event, he’s actually won it three times. He also holds the tournament record of a 21-under 267 set in 2015. Last year, he beat Abraham Ancer by one stroke with a 10-under 274.

TPC Potomac hosted a PGA Tour event from 1987-2006 and then again from 2017-18. Francesco Molinari’s victory in the Quicken Loans National in ’18 tied the course record of a 21-under 259, which was originally set by Adam Scott in the 2004 Booz Allen Classic.

The course opened in 1986 but was plagued with flooding and drainage problems, which eventually cost its Tour stop. It underwent a $32 renovation in 2007 to fix the issues.

The course’s two par-5 holes are also over 600 yards apiece, meaning no eagle chances there.

For the second-straight week, there’s a heavy favorite in a PGA Tour event. Jon Rahm cashed in last week at the Mexico Open, so can Rory McIlroy (+900) do the same this week? He no doubt owns this event, but it’s being held at a course he’s never played on before. After an impressive fall and winter where he won the CJ Cup at Summit and had some near-misses on the European Tour, McIlroy turned in a second-place effort at the Masters after closing with a 64 on Sunday. He hasn’t played since then, so he’s well-rested heading into an important stretch this month.

May have turned things around last week, posting a runner-up finish for his first top-10 since winning The Northern Trust last summer. But don’t let one week fool you, as his odds don’t give great value here based on his overall body of work this season.

An Englishman (Matthew Fitzpatrick) and a Canadian (Corey Conners) are next at +1750. Conners has four top-12 finishes in his last six starts, including a third at WGC-Dell Technologies Match Play and a sixth at the Masters. Even with the good finishes, he’s had at least one round over par in his last nine events, so he will need to put together four solid rounds to contend here. Fitzpatrick missed the cut at the RBC Heritage, but he ranks seventh on the PGA Tour in Scoring Average and his 134th-place ranking in driving distance won’t be too much of a factor at TPC Potomac. He had four top-10 finishes to his credit in eight tournaments played in 2022.

Another Englishman playing on the PGA Tour this year, stands at +2250 as he looks for his first victory since 2020. With distance not as much of a factor this week, it could be a good tournament for the PGA Tour leader in Strokes Gained: Putting. Hatton struggled at the Masters by coming in 52nd, but he has a runner-up at the Arnold Palmer Invitational, and besides Augusta, he hasn’t finished outside the top 26 in his other seven starts in 2022.

And are playing well. Woodland has flown under the radar a bit, but he has five top-25 finishes in his last seven starts with three top 10s in that stretch. Henley hasn’t won in over five years, but he did play this course in 2017. He started 2022 with a runner-up finish at the Sony Open and had back-to-back 13th-place efforts at the Arnold Palmer Invitational and The Players Championship. He’s fifth on the PGA Tour in Scoring Average and ninth in Greens in Regulation Percentage.

Had a disappointing performance in his home country of Mexico last week, but he gets a chance to rebound on a course where he finished in fourth place in 2018. Ancer was also runner-up to McIlroy at Quail Hollow in last year’s Wells Fargo Championship.

is a slight longshot at +3250, but there’s value in this pick. The Australian finished fifth and 13th at TPC Potomac at the two Quicken Loans Nationals held here. Leishman has a win in each of the last three seasons, and while he only has one top-10 finish this year, he’s one of the few golfers with a proven record here.

Has flown under the radar despite some very strong finishes as of late. The veteran can still win, having done so twice as recently as 2019, and his last two finishes have been superb—a runner-up at the Valero Texas Open and a third at the RBC Heritage two weeks ago. He’s also second on the PGA Tour in Strokes Gained: Around-the-Green.

A huge underdog would be Francesco Molinari (+15000), who won here in 2018 (and tying the course record) as part of a torrid stretch that also saw him win the Open Championship. The 39-year-old Italian has struggled this season, but he was sixth in The American Express at PGA West and also finished tied for 42nd in tough conditions at The Players Championship.

A huge underdog would be Francesco Molinari (+15000), who won here in 2018 (and tying the course record) as part of a torrid stretch that also saw him win the Open Championship. The 39-year-old Italian has struggled this season, but he was sixth in The American Express at PGA West and also finished tied for 42nd in tough conditions at The Players Championship.

Big-name golfers have fared pretty well in recent weeks, including Rahm last week, Scottie Scheffler at the Masters, Jordan Spieth winning at Harbour Town, and Patrick Cantlay and Xander Schauffele winning the Zurich Classic. McIlroy could continue the trend, and at +900, the value isn’t terrible. We also like Conners and Hatton along with Leishman as a longshot.