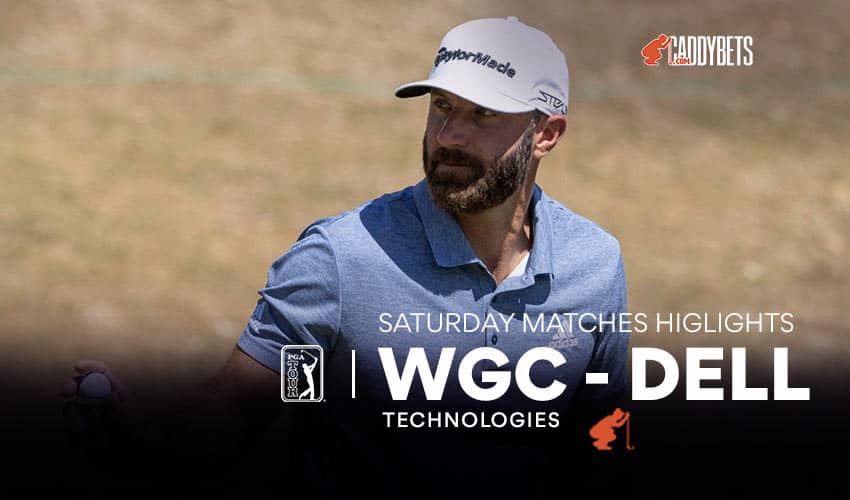 Golf’s version of March Madness keeps chugging along as the final sixteen golfers battled to end the day as one of the final four heading into Sunday. Here is our WGC Dell Technologies Saturday Highlights & Sunday preview.

Two former champions of the WGC Match Play Championship advanced in their matches on Saturday, and now they have the opportunity to set up a final on Sunday afternoon. In a not-so-epic match, Dustin Johnson took down Brooks Koepka, and Kevin Kisner buried Will Zalatoris at Austin Country Club. Those two will play separate matches early on Sunday ahead of the championship.

Kevin Kisner 4 and 3over Will Zalatoris

I must admit, I was all-in on Zalatoris in this battle, especially when he started dropping his putts on Friday, but Saturday brought a new day, and he was just not able to get anything going. Zalatoris was not consistent at all, and he didn’t hit the ball well, which basically gave Kisner three holes with bogeys. To Kinser’s credit, he took advantage of Zalatoris’s poor play and slammed the door shut with a 39-foot bomb to put the match away. Kisner loves playing on this course, and he will be a tough out on Sunday.

Corey Conners 2 up over Abraham Ancer

Ancer didn’t make a birdie over his last seven holes, and Connors was consistent enough to take advantage of Ancer’s play by dropping his putts. Sitting at +330 odds, as projected by Jazzsports, Conners is an extremely interesting proposition heading into Sunday. Connors can wear you out with his constant ball striking and will jump on his opponents’ mistakes for his advantage.

This match-up was fascinating, as both golfers hit the ball quite well, but neither could make any putts, which resulted in only six total made birdies (three from each side). The match’s highlight came on the 18th hole when, with a 1-up lead, D.J. drove the green on the 369-yard hole and two-putted for birdie to end the festivities. D.J. enters Sunday as the co-favorite with +220 odds, as projected by Jazzsports, but I find it hard to see him winning this tournament if he doesn’t start dropping some more birdies.

Scottie Scheffler 3 and 2over Seamus Power

Scheffler advanced to the Sunday matches for the second year in a row with an eagle chip-in on the par-5 16th to win 3 and 2. More impressive was Scheffler’s ability to lead all players on strokes gained tee to green, which will make him almost impossible to beat on Sunday. Currently sitting at +220 odds, as projected by Jazzsports, Scheffler is my pick to win the 2022 WGC-Dell Match Play. This could be a massive win for Scheffler on Sunday because if wins two matches, he’ll become the 25th golfer ever to rise to No. 1 in the world.

The odds for the WGC-Dell Technologies Match Play have been posted. Dustin Johnson and Scottie Scheffler have been inserted as the favorites, as projected by Jazzsports. In addition, all odds to win the tournament have been updated below:

Join us to receive our daily Golf content and make sure to stay tuned for golf news, and PGA Tour schedule and WGC Dell Technologies Saturday updates.