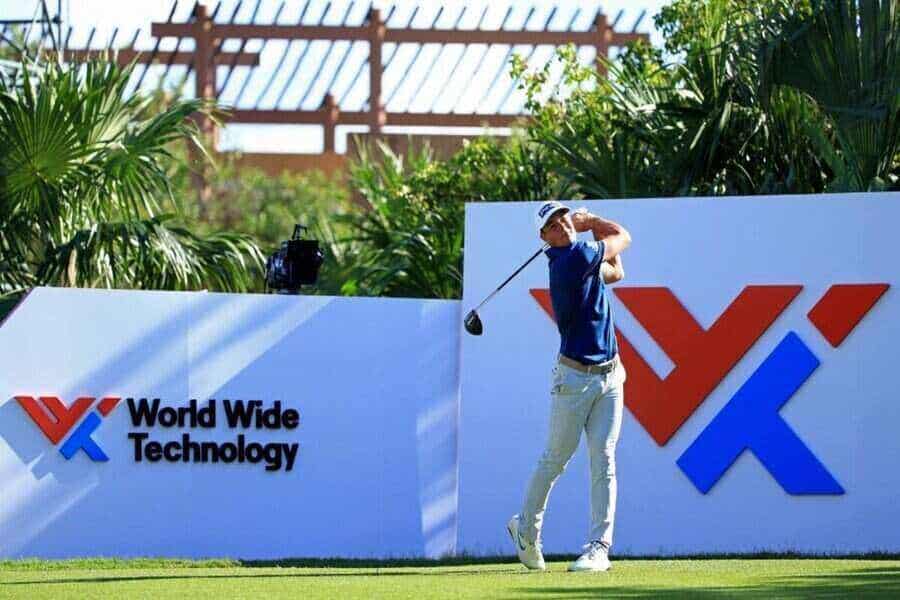 As the players finish their third round of the World Wide Technology Championship at Mayakoba, we see the top of the leaderboard change for the first time. Although, the lead was handed from one former OSU standout, Matthew Wolff, to his former OSU teammate and defending champion in Viktor Hovland. But before getting into the World Wide Technology Championship Final Round, let’s recap the first two.

Accuracy was the name of the game in the first round; the round one leader only used his drive once on Thursday on the par-5 13th. However, Matthew Wolff must have read our scouting report because he kept his driver in the bag all day, kept his ball in play, and fired a 10-under 61 to match his career-low on the PGA Tour.

Other notable names are Rickie Fowler, who opened with a 66, along with Ian Poulter. Defending champion Viktor Hovland and Tony Finau were in the group at 67, while Brooks Koepka and Shane Lowry settled for 71.

Wolff had no trouble making birdies on the day after he opened with a 10-birdie round of 61. He birdied every one of the par 5’s for the second straight day. Wolff was on the verge of increasing his lead Friday at Mayakoba until a pair of late bogeys forced him to settle for a 3-under 68.

Wolff was cruising along until he found a greenside bunker on the tough par-4 16th, which played into a light wind, and failed to get up-and-down with a 35-yard sand shot. His 3-wood off the tee at the 18th went left into a bunker, and he missed a 12-foot par putt on his final hole.

Scottie Scheffler finished with a par for a 64 and wound up within two shots of the lead. Scheffler moved to second with +500 odds to win the whole tournament, as projected by Jazzsports.

Defending champion Viktor Hovland of Norway and Carlos Ortiz of Mexico each had 65 and were three shots behind. Hovland overcame a bizarre break on No. 1 after he made the turn when his approach took a wild bounce and went out-of-bounds, leading to double bogey. Hovland currently sits behind the leaders at +550 odds to win the whole tournament. Hovland is my player to watch, as he seems to be gaining momentum at the right time.

Sitting only three shots back, I expect Hovland to make a run on Saturday and run down his former college teammate Wolff.

There is a group of ten players tied for fifth at 9-under 135, a group that included Justin Thomas. Thomas sits right behind Hovland at +700 odds to win the whole tournament.

I hate to say I told you so… but I told you so! Viktor Hovland not only chased down his former teammate from OSU, but he blasted past him to jump to the top of the leaderboard after his round three performance on Saturday at the World Wide Technology Championship at Mayakoba. With his solid play on Saturday, Hovland also became the odds on favorite to win the whole tournament at -175 odds, as projected by Jazzsports.

Hovland, the defending champion, finished with a 9-under 62 and a two-shot lead over yet another former OSU teammate Talor Gooch. Hovland certainly didn’t play it safe, as he hit his driver just over the green on the par-4 17th and then followed that up with a dart into the closing hole at El Cameleon for the lowest score of his PGA Tour career.

Matthew Wolff, who started the day with a two-shot lead and was the favorite to win the tournament, made a pair of bogeys early in his round to fall out of the lead and then managed only one birdie in his round of 73 that dropped him out of contention.

Scottie Scheffler, who started in second place two strokes behind Wolff to start the day, had a good start, and then things went downhill fast.

Scheffler double-bogeyed the 14th hole when he drove into a hazard that led to a 70 that put him seven shots behind and dropped his odds to win the tournament to +6500, as projected by Jazzsports.

Who will Win the tournament?

The final two groups on Sunday will contain Justin Thomas with Carlos Ortiz, and the final pairing will be former OSU teammates Viktor Hovland and Talor Gooch. Both Thomas and Gooch sit at +400 odds to win the tournament, while Ortiz sits at +2500, as projected by Jazzsports.

Gooch is the most interesting of the group, as he has started 102 tournaments but has yet to claim the trophy in any of them. Gooch currently sits two strokes behind the leader and is playing some of his best golf, but I just don’t think he will have enough to overcome either Thomas or Hovland.

Thomas currently sits three strokes back, and after a horrible start to the tournament, he has found his rhythm and should challenge Hovland all day on Sunday. However, ultimately it just won’t be enough.

I project Viktor Hovland to outlast Thomas as it comes down to the final hole with Thomas already finished and waiting to see if Hovland will falter.

Hovland is not only playing well, but he is playing with extreme confidence, so look for Viktor Hovland to hoist the trophy once again this year.

After round three at the World Wide Technology Championship Final Round at Mayakoba, Viktor Hovland has taken control of the leaderboard and is currently the favorite at -175 as projected by Jazzsports. The odds after round three have been updated below.

Sign up and make sure to stay tuned for World Wide Technology Championship Final, golf news and PGA Tour schedule