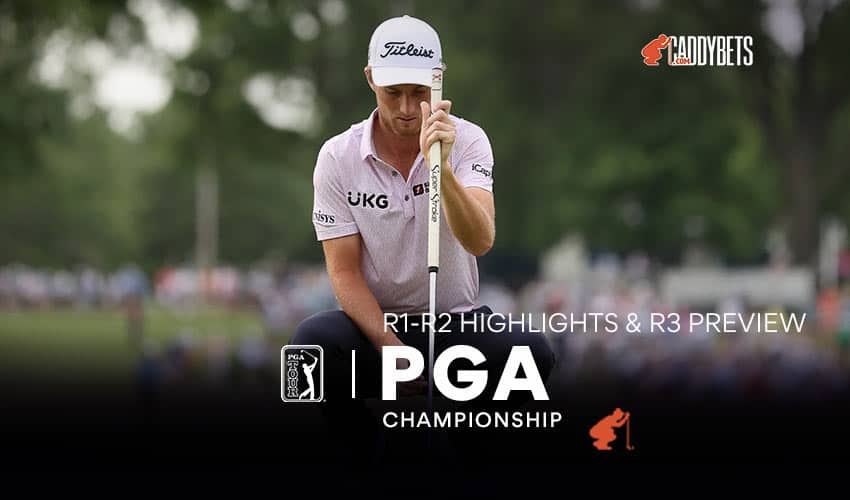 PGA Championship Round 1 & 2 Recap & Round 3 Preview

American hot-shot Will Zalatoris leads the way at -9 at the halfway point of the US PGA Championship following a stunning second-round 65.

In tough conditions, Zalatoris had complete control of his golf ball and produced a remarkable back nine where he birdied four holes.

Zalatoris leads the entire Tour in strokes gained through approach and in greens hit in regulation, and it’s his accuracy which has helped separate him from the rest of the field.

Joining Zalatoris in today’s final pairing will be Chilean Mito Pereira. Pereira shot a superb 64 to sit at -8, just one shot behind Zalatoris. The two contenders have never won a PGA Tournament between them and it will be interesting to see how they handle the occasion.

Round 1 leader Rory McIlroy couldn’t make the most of some of the better conditions shooting a disappointing 71. McIlroy sits five strokes behind Zalatoris and considering McIlroy is used to chasing over the weekend, it would be foolish to discount the Northern Irishman.

A special mention should go to Justin Thomas who looks perfectly positioned at -6 heading into the weekend. The champion from 2017, Thomas has had to contend with the worst of the conditions in both of his rounds. Thomas has the golf ball under his spell, and he will be leading the charge in trying to apply the pressure to the final pairing.

Golf Betting odds ahead of Round 3

Forty players are within ten shots of the lead and everyone who has made the cut will still believe they have a shot of winning this famous tournament.

For those that like to back favourites, Zalatoris can be backed at +185. Just behind him in the betting is Thomas who is priced at +350.

Despite sitting just one shot behind Zalatoris, backing Mito Pereira could be the value play. If you back the Chilean to hold his nerve, odds of +550 could be particularly appealing.

Rory McIlroy will be looking to go one better than when at the Masters when the Northern Irishman almost clawed back an eight-shot deficit. McIlroy can still be backed at a nice price of +700.

Lying six shots off the lead and a man who heads into the weekend completely under the radar is Australian Cameron Smith. Odds of +2000 could be generous if the Aussie can get on a roll.

With Scottie Scheffler missing the cut, Jon Rahm remains the highest-ranked player left in the tournament. The fiery Spaniard sits 11 shots behind Zalatoris but will believe he still has a chance of winning, as will Tiger Woods.

Woods who won the last time the tournament was hosted at Southern Hills finds himself twelve strokes behind heading into Round 3.

If Rahm and Woods are players you believe can still win, Jazz Sports will allow you to bet with the field, meaning you can back almost half of the remaining competitors to win at odds of +275.

Follow us on Social Media for 2022 US PGA Championship, Official World Golf Ranking, and more updates!