The PGA Championship, referred to as the U.S. PGA Championship outside of the United States, is an annual golf tournament that is the signature event of the Professional Golfers Association (PGA) of America. It is considered one of the four majors of golf, and the tournament dates back to 1916.

While the PGA of America organizes the event, it is an official event on the PGA Tour, the European Tour, and the Japan Tour. It has historically been played in August as the final major of each calendar year, but it was moved to mid- to late-May starting in 2019, so it now is the second major after the Masters Tournament.

The location of this golf tournament changes each year, as courses bid on hosting the event.

The game of golf did not have a governing body until the United States Golf Association (USGA) was created in 1894. The PGA was established in 1916 and held its first championship in October of that year at Siwanoy Country Club in Bronxville, New York. Jim Barnes won that first event and earned a $500 prize. He also was awarded a gold medal donated by Rodman Wanamaker, who hosted a luncheon for golf professionals that ended up leading to the creation of the PGA. Wanamaker later donated a trophy that was named the Wanamaker Trophy and is awarded to the tournament’s champion in present day.

The even was originally a match play tournament and would sometimes take up to a week to complete. In 1957, the tournament lost money, prompting a change to a stroke-play format that began in 1958.

Scheduling was another hurdle that this golf Championship had to clear to increase its prominence. The event was played the week after The Open Championship into the 1960s, which kept players from being able to reasonably participate in both. Arnold Palmer is credited for the nudge that tournament leaders needed to change the date of the PGA Championship, which also cemented it as the fourth major of golf, to go with the Masters, the U.S. Open, and The Open Championship.

The thttps://caddybets.com/us-open/ournament moved to an August date in 1969 and held that spot until the change in 2019. It’s believed that change was made to accommodate the Olympic golf tournament that is held every four years, and it also allows the FedEx Cup playoffs to begin a bit earlier and wrap up on Labor Day weekend in the United States.

Awards for the Champion

In addition to the Wanamaker Trophy—which is given to the winner for one year, at which time they receive a smaller replica to keep—a cash prize is awarded to the winner. Jim Barnes won $500 to win the first PGA Championship, and Phil Mickelson won $2.16 million for claiming victory in 2021.

Fringe benefits include a lifetime exemption into this golf tournament along with five-year exemptions into the other three majors, along with guaranteed membership to the PGA Tour for five years and the European Tour for seven years. The winner also gets 600 FedEx Cup points and 100 Official World Golf Ranking points.

A total of 156 golfers participate in the PGA Championship each year. The top 100 golfers in the Official World Golf Rankings are invited.

The PGA Championship is also the only major that doesn’t invite amateurs. The only way an amateur can compete is if he previously wins a major or wins a PGA Tour event on a sponsor’s exemption.

Twenty spots in the field are also reserved for club professionals. They qualify through the club pro championship each April.

Since 1958, the tournament has employed a 72-hole event played in four rounds. The rounds are currently contested on the Thursday through Sunday of the weekend prior to Memorial Day weekend in the United States. After 36 holes, the top 70 (plus ties) make the cut and are permitted to play the final two rounds.

In the event of a tie after 72 holes, eligible golfers will replay holes 10, 17, and 18, and the person who has the lowest aggregate score after the three holes is the winner. If players are still tied at that point, they will replay the 18th hole in a sudden-death format until there is a winner.

The event is typically held in the eastern half of the United States, as just 11 events have been in the western half of the country. The state of New York has held the most editions of the tournament (13), followed by Ohio with 11, Pennsylvania with 9, and Oklahoma, Michigan, and Illinois tied with six.

Southern Hills Country Club in Tulsa, Oklahoma has hosted a record four events and will host a fifth in 2022.

Jack Nicklaus and Walter Hagan are tied with the most PGA Championship victories with five each. Nicklaus also holds the record for most runner-up finishes with four. Other multiple-time winners in the modern era include Tiger Woods with four, while Phil Mickelson, Brooks Koepka, Rory McIlroy, and Vijay Singh all have two wins.

The largest margin of victory in the stroke-play era is eight, recorded by Rory McIlroy in 2012. The lowest 72-hole score was 264 by Brooks Koepka at Bellerive Country Club (par 70) in 2018, and Jason Day had the lowest score in relation to par, finishing at 20-under in 2015 at Whistling Straits (par 72).

Follow us on Social Media for more PGA Golf updates. Make sure to stay tuned for the PGA Tour Schedule & PGA Championship Odds. Justin Thomas wins final round of the 2022 PGA Championship

Scheffler Favored Over Rory and Rahm at PGA Championship, but All Eyes Will Be 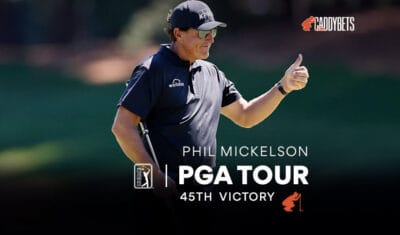 Mickelson After Winning The PGA Championship 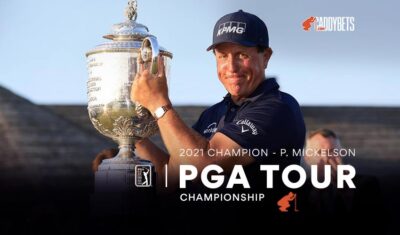 A year ago, at the 102nd PGA Championship at TPC Harding Park, Phil Mickelson