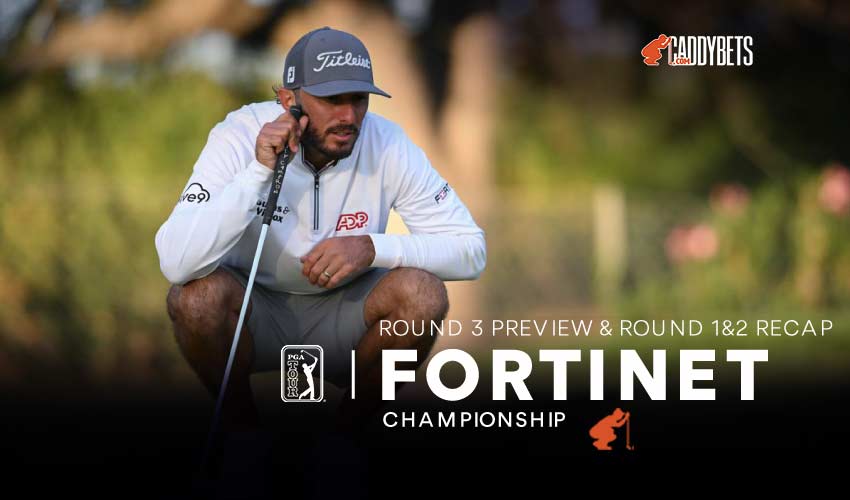 PGA Fortinet Championship Recap for Round 1 & Round 2

Many of the game’s top names will take some well-deserved time off, but even in their absence, there are some big names currently at the top of the leaderboard.

Max Homa, had his best season on Tour, winning the Wells Fargo and finishing in a tie for 5th in the FedEx. Homa has wasted no time and has carried on where he has left off and co-leads the field alongside Danny Willet.

The Californian has been a birdie machine in his first two rounds and signed off his second round with a stunning eagle, maintaining his spot at the top of proceedings.

His co-leader is English man Danny Willet who has hit the ball beautifully over his first two rounds. Willet is the 2016 Masters Champion, and since then wins have been few and far between. A one-time winner on the PGA Tour, Willet will be hoping he can double his tally with a good showing this weekend.

Willet and Homa hold a two-stroke lead over South Korean Ben An. An is in a tie with little-known American Justin Lower, with both looking to land the biggest title of their respective careers.

Starting day four behind the leaders are the duo of Matt Kuchar and Sahith Theegala. Both Kuchar and Theegala are at differing stages of their career with Kuchar looking to win PGA Tour title number 10 and Theegala his first.

Theegala could be the danger man, a prolific scorer, he won’t be phased by the four-shot deficit he currently faces and will be looking to build on his Tour Championship finish where he placed 28th.

It is easy to see why Max Homa is the current favorite for this year’s Fortinet. Homa started the week as the second highest ranked player in the field and has quickly developed into one of the best ball strikers in the game. Deadly with his irons, Homa will give himself plenty of looks for birdie over the weekend. Homa is riding high following his tie for 5th at the Tour Championship and is rightly placed as the man to catch.

Joining Homa in today’s final pairing will be Danny Willet. The Englishman is a fine player on his day but can often lack consistency. Not a prolific scorer, Willet might be hoping this turns into a grind which will certainly play to his strengths.

We have already highlighted the scoring prowess of Sahith Theegala and at +1100 he could be very well placed to make a significant leaderboard move. Theegala has quickly established himself as one of the blockbuster names on Tour and he will certainly have the backing of much of the crowd as he looks to land his maiden PGA Tour title.

Matt Kuchar certainly knows how to get the job done. A veteran on the Tour, Kuchar picks his tournaments carefully. Whether the Texan has four good rounds in him remains to be seen, but at a price of +2500, he is a viable long-shot option today.