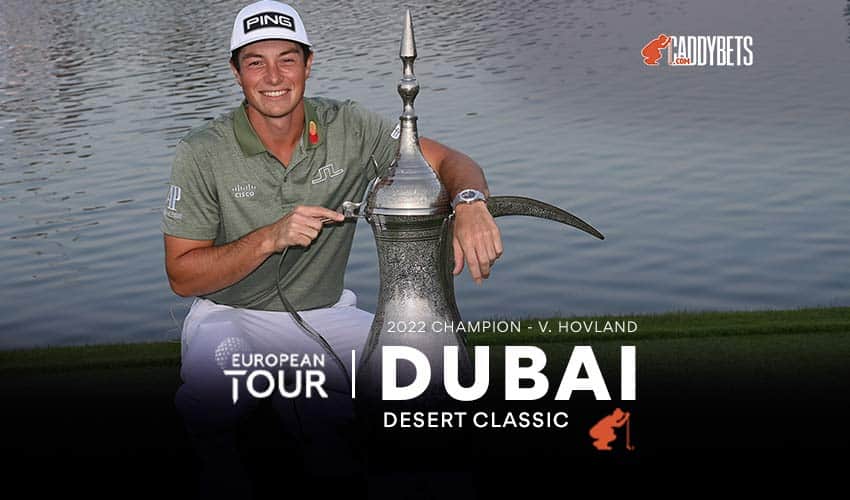 Coming down the stretch at the final round of the Dubai Desert Classic, the DP World Tour’s second-straight Rolex Series event, it looked like Rory McIlroy was well on his way to his third victory in this event.

Going into the final two holes, one birdie and a par would be enough for McIlroy to claim the title, and most players had handled the finishing holes well, including Viktor Hovland and Richard Bland, who we will get to in a minute.

McIlroy’s tee shot on the par-4 17th was wild, but he was able to get up and down from the rough to save par. A birdie on the par-5 18th was then necessary to win. But his second shot found the water, and he ended up looking at a 15-foot putt for par to force a three-way playoff but missed, earning him third-place honors.

Hovland, meanwhile, finished the final three holes at 4-under (birdie, eagle, birdie) to finish at 12-under 276 for the tournament. Bland birdied both 17 and 18 to also finish at -12, and the two waited to see what McIlroy would do.

On the first playoff hole, the duo replayed No. 18, and Viktor Hovland two-putted for birdie, whereas Bland could not get up and down to match the 24-year-old’s effort, giving him his third win in his last five starts, spanning the PGA Tour and DP World Tour.

“This is pretty wild. I didn’t really think this was possible going in today,” said Hovland, who started the day six shots off the lead. “I knew I had to shoot a really low number but a lot of things had to go my way and I’m thankful that they did.”

Viktor Hovland, who won a PGA Tour event in Mexico and then the all-star-style event Hero World Challenge in December, was also fourth at last week’s Abu Dhabi HSBC Championship and moved up from No. 5 to No. 3 in the Official World Golf Rankings, behind Jon Rahm and Collin Morikawa. Despite the late collapse, McIlroy jumped two spots from eighth to sixth.

Hovland’s victory was his first Rolex Series event and second on the DP World Tour to go with his BMW International Open victory last June.

Bland, 48, was looking for his second DP World Tour win, but even with the runner-up finish, he’s up to third in the Race to Dubai standings. Even though he’s been a pro since 1996, his first win on the tour came last May at the Betfred British Masters hosted by Danny Willett.

Tyrrell Hatton continued his hot play as well, recording his third top-10 in his last four events on the DP World Tour with a fourth-place finish this week. He was sixth in Abu Dhabi last week, 16th at the DP World Tour Championship, and tied for runner-up at the Alfred Dunhill Links Championship last October.

Get the latest information on the Dubai Desert Classic updates, golf news, and PGA Tour schedule. Sign up to receive our daily Golf content and become a winner.