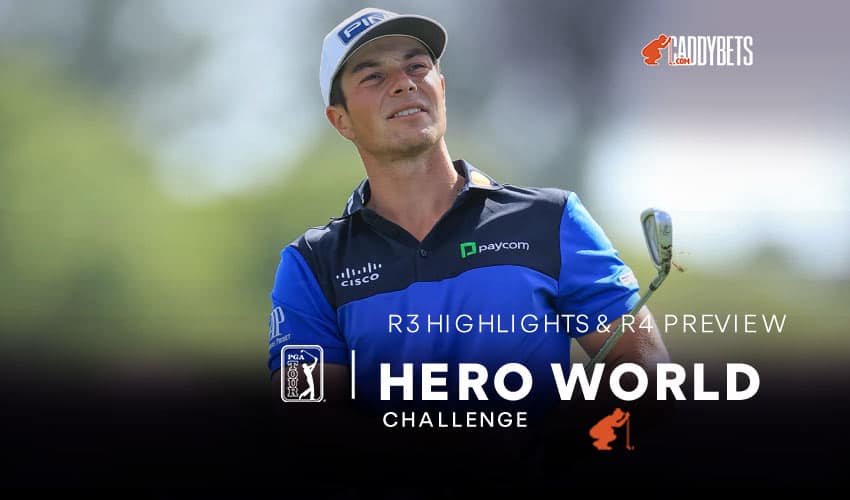 Defending champion Viktor Hovland will be looking to repeat his success from last year as he heads into today’s Hero World Challenge final round, with a three-stroke lead over Scottie Scheffler. Justin Thomas and Cameron Young share third place but are five strokes behind. Collin Morikawa and Xander Schaufelle round out the top 5 but will start today six off the pace.

Hovland dominates back 9 to extend lead

The first two rounds of this year’s Hero World Challenge were played amongst some tough conditions but yesterday’s third round was much more favorable for scoring.

Hovland started the day with a one-stroke lead and as the third round developed saw his lead was overtaken by Cameron Young. Undeterred by the leaderboard pressure, Hovland went on the attack and produced a stunning back nine that saw him score 6 birdies in seven holes.

Leading by four, Hovland would have been disappointed to have dropped a shot on his final hole to head into today’s final round three strokes ahead.

Young starts well but drops away, Scheffler emerges from the pack

Cameron Young has had a sensational 2022 which has seen him soar up the PGA rankings. All that is missing is a first Tour win and it looked like it could potentially come here.

Young briefly held the lead after a stunning start to his round which saw him birdie four of his first seven holes. However, bogeys on his 11th and 14th holes coupled with Hovland’s back 9 charge will see him start today five off the lead.

Scottie Scheffler made no secret of his desire to win this week and regain his world number-one ranking. Scheffler still remains in contention to do that but will need to play some special golf if he is to overhaul Hovland’s three-stroke lead. Scheffler produced a 66 yesterday which included a stunning eagle on the 15th. He has scored ten birdies in his last 36 holes and will be hopeful of carrying that momentum into today’s final round.

With Hovland creating separation from himself and the rest of the field, it isn’t a surprise to see that Jazz Sports have positioned him as the heavy favorite today.

Hovland has led from start to finish and is clearly comfortable in his surroundings. Worryingly for the rest of the field, he played his best golf when under the most pressure, and if conditions are tough his three-shot lead could be very difficult to claw back.

Scheffler starts the day as the second favorite and will need things to fall his way if he is to end his 2022 with a victory. Scheffler has proved on countless occasions that he can be a birdie machine and he will need the putts to fall today.

Justin Thomas rounds off the top three in the betting and he has quietly risen into contention. A bogey-free third round of 66 saw him move into the third position and it would be foolish to discount his chances.

The value bet of the day could be Xander Schaufelle who will start today’s final round six strokes back. Schaufelle couldn’t keep his card clean yesterday with four bogeys canceling out his seven birdies. Schaufelle has the ability to overcome the deficit he currently faces but will need to do a better job of keeping his ball out of trouble.