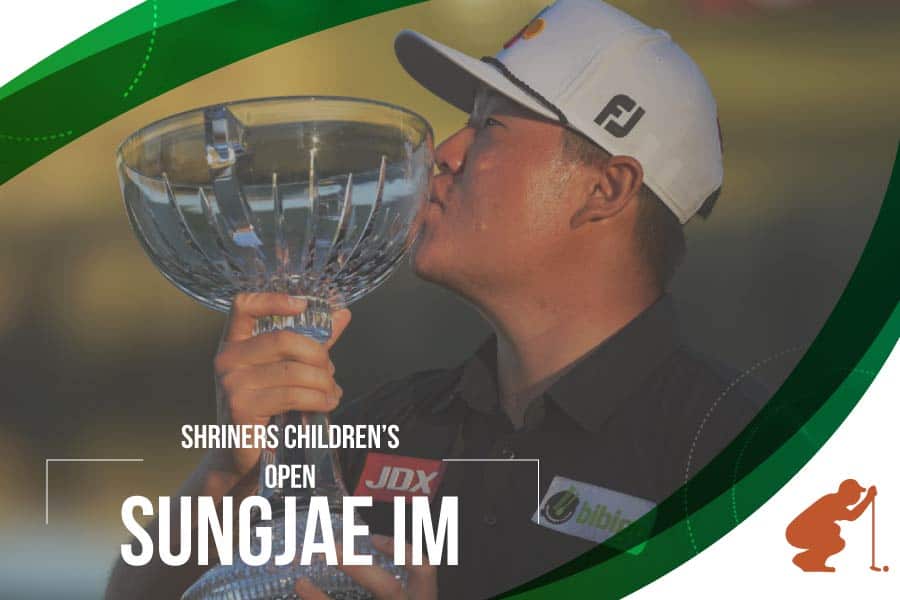 Starting the day three shots behind leader Adam Schenk, Sungjae Im birdied four of his first seven holes and didn’t look back from there, winning the Shriners Children Open recap by a whopping four strokes after logging birdies on holes 9 through 13. Matthew Wolff was in second place at -20, while Schenk, Rory Sabbatini, and Marc Leishman were all tied for third at 19-under at TPC Summerlin in Las Vegas.

The victory marked Im’s second win on the PGA Tour and his first since a win at the Honda Classic in March 2019. Coincidentally, his first win came in his 50th start on the tour, and his second win came on his 100th start.

“It was very tough to get my first win, but I felt like the second one was harder and harder, but I kept my patience,” Im said after the victory. “I tried to stay composed throughout the period, and I’m glad it came.”

Im, 23, and Chad Ramey were tied for the lead after 36 holes. After a one-under 70 on Saturday, however, Im found himself behind by three strokes, but Sunday proved to be a different story right from the beginning.

“The big difference between yesterday and today was today, there was no wind compared to round 3, and that made it easier,” Im said. “Tee-to-green, drivers, irons, putting game—it worked as I wanted it to, and it gave me a good result.”

After sitting at nine-under par through 13 holes on the par 71 course, Im was on track to become the 13th golfer to shoot a round under 60, but he parred the final five holes to end up with a 62. He wasn’t challenged on the leaderboard, so that allowed him to finish the tournament conservatively and not worry about making any unforced errors. Im said that he was happy to be able to put enough great rounds together to win a tournament after having so many rounds under par last year, which showed him that his game was coming back into form after the break due to COVID-19 in 2020.

“I was on a really good roll, and I was feeling great about my game after the Honda win,” Im explained. “After the pandemic, when golf resumed, I really tried to find that rhythm again, and there were times that was not easy. But, again, try to stay composed and believe in my game.”

Im had some inconsistent results over the summer, but he did play well enough to make it to East Lake and the Tour Championship. He then took a four-week break (his longest since 2018, when he was on the Korn Ferry Tour) before opening his 2021-22 season last week at the Sanderson Farms Championship, where he placed 31st.

Even though Schenk was unable to keep his lead in the final round, he has to be feeling good about his game. He had four top-10 finishes in his first 110 starts on the PGA Tour, but in his last nine events, he has three top-fives. He opened with a birdie on Sunday but struggled on the rest of the front nine, sitting at 3-over on the day after No. 10. But he was able to get three more birdies on the back nine to end up in a tie for third.

“Everyone’s good enough to win out here; you just have to believe in yourself and not beat yourself, in a sense,” Schenk said. “I started to believe a lot more in the last couple months.”

Matthew Wolff’s second-place finish came one year after going to a playoff here a year ago with Martin Laird and Austin Cook, which was won by Laird. He’s struggled ever since, not placing better than 15th, but a runner-up -20 here gives him hope for the future, especially after he took a two-month break from the tour earlier this year to address some mental health issues. He hopes that this strong finish means better days are ahead, but he will seemingly be a contender at TPC Summerlin for years to come, as he now has 12-straight rounds here in the 60s.

“Obviously, I knew I had the game; I think just, maturity-wise and mentally, I’m just a much stronger and more all-around, just a more complete person,” Wolff said of his time away. “I’m able to put things in perspective more when stuff isn’t going my way. I’m able to bounce back.” Summerlin.

Leishman (63) and Sabbatini (64) also had stellar rounds on Sunday and were rewarded with a third-place tie with Schenk.

Sam Burns looked like he might make a charge to win two-straight tournaments after his win at the Sanderson Farms Championship last week, as he was leading at -17 at one point on Saturday, but he ended up with a +1 72 on Sunday, which was his first round out of the 60s in his previous nine overall. He ended up tied for 14th, which was good enough to put him in first place in the FedEx Cup standings at this early point in the season.

Laird did not contend in his quest to defend he title, but he played solid golf all week. He tied for 11th at -16 and shot 68 or better in all four rounds, which gives him nine-straight in the 60s here at TPC

Further down the leaderboard, Lanto Griffin and Adam Hadwin were tied for sixth at -18, and rookie Hayden Buckley, Aaron Wise, and Harry Hall were tied for eighth place at -17.

The PGA Tour remains in Las Vegas for next week’s CJ Cup at Summit Club, which was won last year by Jason Kokrak. This will be the most star-studded field of the new PGA season, as 24 of the top-30 finishers from last year’s FedEx Cup standings are participating, along with 17 of the 24 players in last month’s Ryder Cup, including former FedEx Cup champions Dustin Johnson, Rory McIlroy, Justin Rose, Jordan Spieth, and Justin Thomas.