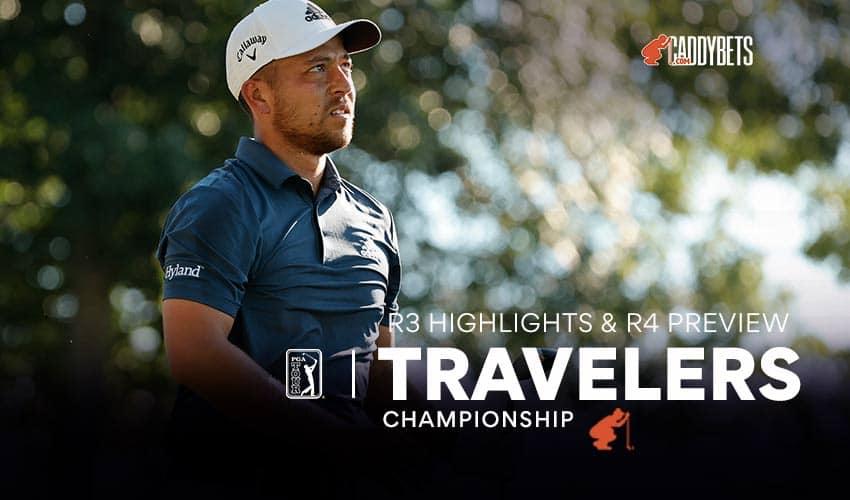 Heading into round 3 of this year Travelers and birdies were very much the order of the day. Played at TPC River Highlands, the course can certainly yield them and the remaining players in the field did their best to fly up the leaderboard. Here is our 2022 Travelers Championship R3 Recap & R4 Odds to win.

Starting the day in the lead was Xander Schaufelle who headed into the day with a five-stroke lead. Looking to stretch further away from the field, Schaufelle couldn’t quite get the putts to drop and could only shoot a -3, 67.

With Schaufelle enduring a frustrating day on the greens, his Ryder Cup and Presidents Cup partner Patrick Cantlay enjoyed the round of the day. As we flagged yesterday, Cantlay is enjoying a consistent period on Tour and is looking for his second win in his last six starts. Shooting an impressive 63, Cantlay vaulted up the leaderboard and will start today with just one stroke behind.

Another player who made significant moves was the young American Sahith Seegala. At just 24. Seegala is looking for his first win on Tour and will start the day two strokes behind following an impressive 64.

Kevin Kisner is also right in contention and will tee off four strokes behind after a solid 66.

This tournament has shown time and time again that anybody can shoot low, so despite it looking tight at the top anybody within ten shots will go into today’s final round believing they can win.

Just like the three rounds before, the battle today will come down to who can hold their nerve best on the greens. Shooting low is an absolute must. Xander Schaufelle will start today as the favorite but a one-shot lead in these circumstances isn’t anything at all. Schaufelle has been in superb form all week and across his first 56 holes, he has dropped just one shot. If he can get his round off to a hot start he has a great chance of winning his 6th PGA Tour title.

The man carrying all the momentum into today’s final round is Patrick Cantlay. The defending FedEx Champion, Cantlay can move right to the top of the leaderboard with a win today. During round 3, Cantlay scored eight birdies and combined that with just one bogey, a repeat of that today will surely be enough for yet another title.

Behind the two leaders, the main threat might well come from Kevin Kisner. Kisner will start day four behind but is a prestigious putter. Kisner has proved countless times before that he can go on a scoring streak. Look for Kisner to post something to chase. If he can record a 6 or 7 under par round that could be enough to put the pressure on.

The unknown quantity out of all the leading contenders is Sahith Seegala. Seegala is a player on the rise and a PGA Tour win doesn’t seem too far away. Out of the top four in the betting, he is the only one without a tour victory to his name and that could be telling when it comes down to the crunch.