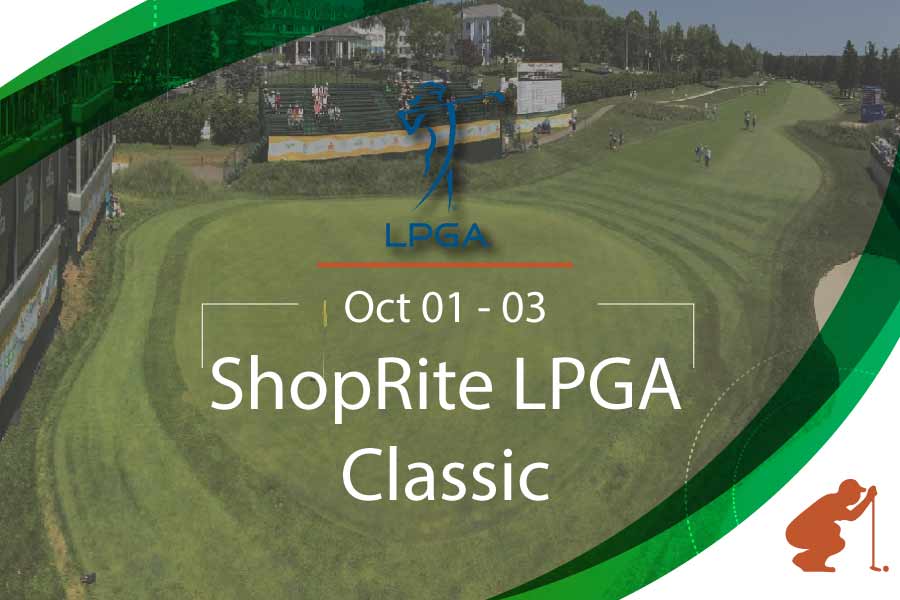 The LPGA makes their yearly trip to the Jersey Shore for the Shoprite LPGA Classic Presented by Acer this Friday-Sunday on the Bay Course of the Seaview, a Dolce Hotel in Galloway, New Jersey, nearby to Atlantic City.

This event began in 1986 and has been played annually with the exception of a three-year break from 2007-09. The first two years of the tournament were played at Seaview and it has again since the tournament restarted in 2010. In between, the event was held at Greate Bay Country Club in Somers Point.

The Bay Course was designed in 1914 and is most notable for hosting the PGA Championship in 1942, which was won by Sam Snead.

Annika Sorenstam and Betsy King are three-time winners of this event and share the record for most titles. In the past decade, Anna Nordqvist (2015-16) and Stacy Lewis (2012, ’14) have won twice here.

The event is typically three rounds, and Nordqvist holds the tournament record of a 17-under 196, set in 2016. Mel Reid, the 2020 champion, shot a -19, but that event was a four-round tournament.

Reid (who is part of a field bet at +400) is back to defend her title, which was her first LPGA victory in four years on tour after winning six times on the Ladies European Tour from 2010-17. She was also part of the Solehim Cup-winning European team last month. Being a winner on the tour has put her into a different mindset coming back to Seaview.

“I think my expectations are certainly higher. It’s extremely hard to win on the LPGA. I think my strength and depth of players out here, people don’t realize how good these girls are,” Reid, 34, said this week. “There’s a certain amount of respect from the players when you win a tournament because people have been out there for many, many years and not been able to get over the line. It was nice to get the monkey off my back, to pull through and know that I can win out here, and it has changed my career to a certain extent.”

The betting favorite is Jin Young Ko (+850), who is on a hot streak by winning two of her last four events. She claimed victory at the Volunteers of America Classic in July and then won the Cambia Portland Classic two weeks ago. She was tied for sixth last week at the Walmart NW Arkansas Championship. This will be her first time playing this event.

Hyo Joo Kim is next at +1100. She’s finished 17th or better in each of her last four tournaments but hasn’t played on the LPGA Tour since July. She was third at the KPMG Women’s PGA Championship in June and won the HSBC Women’s World Championship in April. This is also her first time playing the Shoprite LPGA Classic.

Nasa Hataoka is coming off a win in Arkansas last week and is at +1400 to make it two in a row this weekend. She also won the Marathon LPGA Classic back in July and was runner-up at the U.S. Women’s Open. She, however, has also missed several cuts this season, so consistency has been an issue. She placed fourth here at Seaview in 2020.

Danielle Kang and Lexi Thompson are each at +1800 off the tee on Friday as the highest-ranked American golfers in the field. Thompson won here in 2019 and was third at the U.S. Women’s Open. That was her last top-10 finish until an eighth-place effort last week in Arkansas. She finished tied for 13th here last year in defense of her 2019 title. She’s an 11-time winner on the LPGA Tour but hasn’t claimed victory since this event two years ago. She says that playing a short game here pays off, which was similar to her strategy last week.

“I hit a lot of 2-irons, a lot of 3-woods [last week and will this week]. Sometimes that actually works out because it does get pretty windy out here,” Thompson said. “I love hitting my drivers obviously and playing long, challenging courses, but this is challenging too, especially if it gets windy. You can play aggressively. If the wind gets going, you have to be careful on some holes.”

Kang, a five-time winner on tour, doesn’t have a victory in 2021, but she does have eight top-10 finishes. She was tied for fourth last week and has been in the top 10 in four of her last six events, dating back to June.

Nordqvist, the two-time winner and tournament record-holder, is +2200. She missed the cut last week but her last event prior to that was the AIG Women’s Open in August, which she won. That win was somewhat unexpected, as she had recorded only two top-10 finishes this year prior to that victory. But her past success at Seaview can’t be discounted even though she finished 43rd here last year.

Also at +2000 are Inbee Park and Yuka Saso. The 20-year-old Saso won the U.S. Women’s Open in June and has recorded three top-5 finishes since—back-to-back fifth-place runs at the Marathon LPGA Classic and the Dow Great Lakes Bay Invitational, and then tied for fourth last week at the Walmart NW Arkansas Championship.

History will be made on the U.S. television broadcast of this event, as it will mark the first time that an all-female broadcast team will call a golf event. NBC Golf will provide the telecast and will feature Cara Banks at play-by-play, Judy Rankin and Paige Mackenzie as analysts, and Karen Stupples and Kay Cockerill as on-course reporters.

Here are the latest golf odds from JazzSports for the 2021 Shoprite LPGA Classic.