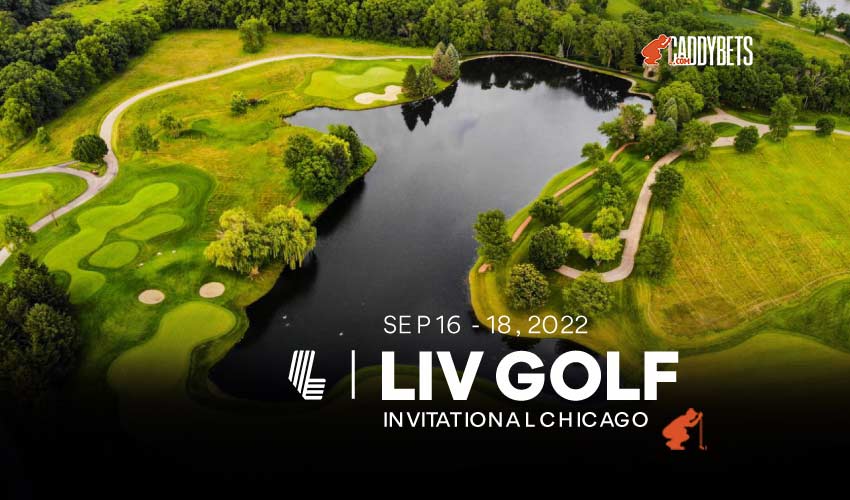 Dustin Johnson looks to continue his dominance of the inaugural LIV Golf Invitational Series as the tour holds its fifth event this weekend in suburban Chicago, Illinois, Here’s all you need to know about 2022 LIV Golf Chicago.

For the first time, the series will be bringing back the same top players from the tournament in Boston that Johnson won two weeks ago.

The series has a points system to crown an individual champion after the eight-event series wraps up. At the halfway point, Johnson leads with 94 points and has a 17-point lead over second-place Branden Grace.

The system awards 40 points to the winner down to one point for the 21st to the 24th. The back half of the 48-man field does not get any points.

Rich Harvest Farms in Sugar Grove, Illinois is the host of this week’s 54-hole tournament that’s taking place from Friday to Sunday. It’s home to the Northern Illinois University golf team and has hosted several top amateur competitions along with the 2009 Solheim Cup, which is women’s golf’s version of the Ryder Cup. It’s a par-72 course that will play rather long at 7,408 yards.

With the same golfers in the field each week and no history to draw upon with the courses that LIV plays on, the odds aren’t very different from what we saw two weeks ago in LIV Boston. Dustin Johnson and Cameron Smith are co-favorites at +600.

Johnson has improved with each event, finishing eighth in the inaugural LIV tournament in London and then finishing fourth, third, and first in his next three. Smith, the highest-ranked golfer in the world who is a part of this series, finished fourth in his series debut in Boston off the strength of a final-round 63, so that can give him some momentum for this tournament.

Joaquin Niemann (+900) led after two rounds in his series debut in Boston but shot a 66 to finish tied for second, one shot behind Johnson on the final leaderboard.

Talor Gooch (+1400) and Patrick Reed (+1600) both finished in the top five at the BMW PGA Championship at Wentworth on the DP World Tour last week. While the two are in good form from that competition, the travel factor has to be taken into account, as it’s a long trip from England to Chicago. Gooch also finished sixth two weeks ago in Boston.

Matthew Wolff (+2800) has competed in three LIV events and finished no worse than 13th, including a runner-up to Henrik Stenson at Bedminster, New Jersey.

Of the big names that have struggled so far in LIV, the only one we would give attention to this week is Bryson DeChambeau (+2500). His length off the tee can be a positive factor on this course, and he does have some good play in him still—as evidenced by his eighth-place finish at the Open Championship.

It’s hard to avoid Johnson and Smith even at the low prices based on how they have played. For a little more value, we would look at Gooch and DeChambeau.
Here are the latest golf odds for the 2022 LIV Golf Invitational Series Chicago Tournament.