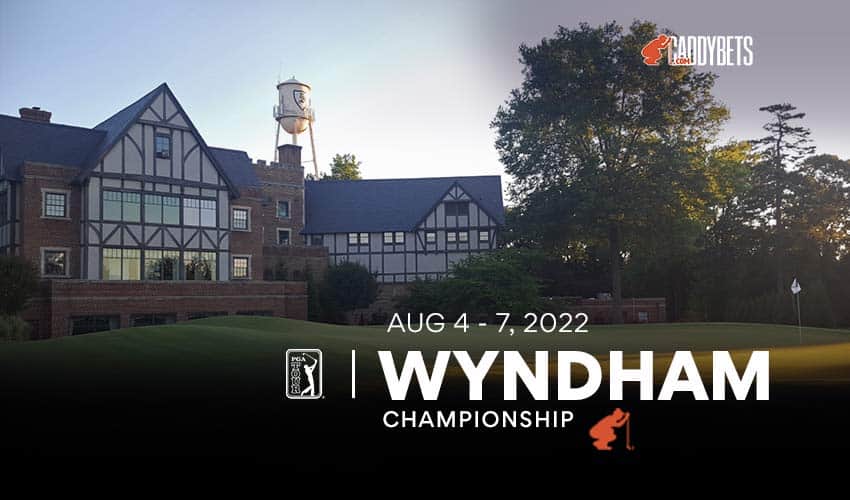 While there will be plenty of attention at the 125th-place mark in the FedEx Cup standings (that’s the cut-off for next week’s playoffs), a wide-open field at the top of the odds board takes to Greensboro, North Carolina this week for the Wyndham Championship.

Kevin Kisner is back to defend his title after winning a six-way playoff in 2021, defeating Kevin Na and Branden Grace in the final playoff hole—with those two golfers not in the field this year after joining the rival LIV Golf league.

The event started in 1938 and was known as the Greater Greensboro Open for much of its history. The legendary Sam Snead holds the record with eight titles in this event with Davis Love III having won three times.

The PGA Tour plays on a Donald Ross-designed course for the second week in a row, visiting Sedgefield Country Club. The first Greater Greensboro Open was held at Sedgefield, and the tournament has been played here for much of its history. The course was renovated in 2008 and has hosted this event every year since. The toughest hole of the par-70, 7,131-yard course is the 18th—a 507-yard hole that’s a par 5 for members but a par 4 in this event.

Sungjae Im (+1400) has had an up-and-down season. He started strong with a win at the Shriners Children’s Open in October and had strong finishes through January but then didn’t have a top 10 until the Masters. That started a five-tournament run of top-20 finishes before missing the cut at the U.S. Open and Genesis Scottish Open, followed by an 81st at the Open Championship. He rebounded strong the following week, however, finishing runner-up at the 3M Open before taking last week to rest.

Will Zalatoris (+1600) attended college in North Carolina at Wake Forest and was under par in every round here last year. His near-misses this year are well-documented: playoff losses at the PGA Championship and at Torrey Pines along with a runner-up at this year’s U.S. Open and the 2021 Masters. Hasn’t been as strong since the runner-up at Brookline, but he ended up 20th last week at the Rocket Mortgage Classic after finishing strong with a 65 on Sunday.

Shane Lowry (+1600), like Zalatoris, has had a strong season but is missing a victory. In 2022, he’s missed one cut in 11 events and has three top-3 finishes. Lowry has a scoring average of 67.3 here at Sedgefield in 14 rounds, having never shot above par.

Billy Horschel (+2000) has been quiet since winning the Memorial in June, but he has a great chance to get back on track before the playoffs begin thanks to a great history at Sedgefield. He skipped last year’s event but was runner-up in 2020 and has finished in the top 11 here in four of his last five tries.

Si Woo Kim (+2200) was one of the five to be in last year’s playoff and has the best history here of anyone in the field. He won here in 2016 and has gotten better in each of his last three appearances at Sedgefield: fifth in 2019, third in 2020, and runner-up last year. He’s had a tough year but was 14th last week in Detroit and 15th at St. Andrews.

Webb Simpson (+2200), like Zalatoris, has home ties to North Carolina and hasn’t finished lower than seventh here since 2017. He also has been struggling this year and just above the 125th-place cut line for the playoffs, so he will have extra motivation to perform well.

Russell Henley (+2500) missed out on the playoff here last year but was the leader after each of the first three rounds, starting with a 62 and 64 before carding a 69 and 71 on the weekend to finish tied for seventh. He was tied for 10th at Detroit so is in good form and looking for redemption.

Kevin Kisner’s (+3000) win here capped a stretch where he’s made the cut at Sedgefield in each of his last sevent tries. In his past two Wyndham Championships, he’s averaged 65.88 strokes per round. He should be well-rested after missing the cut last week and only playing twice since the U.S. Open, which included a sixth at the Travelers Championship.

Taylor Pendrith (+3000) was tied for the lead going into last week’s final round in Detroit but couldn’t contain Tony Finau and finished tied for second. After missing four months following a 13th at the Players Championship, he’s finished no worse than 13th in three July events since returning.

Joohyung Kim (+3000) is just 20 years old but has been on quite a roll since the U.S. Open. Finishing 23rd in just his fourth event, he’s since placed third at the Genesis Scottish Open and was seventh last week in Detroit. Kim was in the position Will Zalatoris was in last year, having to win this event in order to qualify for the FedEx Cup playoffs, so you know that he will be going for it.

Cameron Champ and Kevin Streelman (+5000) are both worth a look. Champ is below the cut line at 141st, but he’s making a strong charge to get in the playoff field after coming in 16th and 20th in his last two events. A 75 at each tournament hurt his chances of winning, but his other six rounds were 67 or better.

Streelman is in good FedEx Cup playoff standing (85th) and has made four-straight cuts, including a runner-up at the Barbasol Championship last month. Streelman was 17th here last year but led the field in greens in regulation, so he can contend with some better putting.

We’re favoring those with a history on this course, including Horschel, Kim, Simpson, and Kisner. We also will take Zalatoris out of the favorites, as he’s been so close to that first win.

Follow us on Social Media for the 2022 Wyndham Championship updates & Official World Golf Ranking, and more!