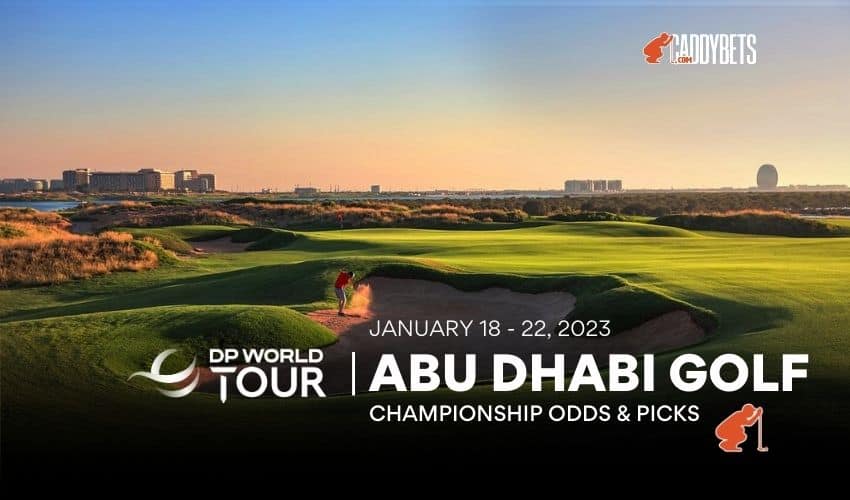 After last weekend’s invitation-only Hero Cup started the 2023 DP World Tour calendar, the first full-field event is a strong one and also features some big names from the LIV Golf tour. The 2023 Abu Dhabi HSBC Championship is also the first Rolex Series event on the tour this season, featuring an event-record purse of $9 million—with a shade over $1.5 million going to the winner.

The three favorites have won this event in four of the past six seasons. Tommy Fleetwood won back-to-back in 2017 and ’18 while Shane Lowry was victorious in 2019 and Tyrrell Hatton came home in first place in 2021. The defending champion is Thomas Pieters, who won last year by one stroke over Rafa Cabrera-Bello and Shubhankar Sharma.

The team-based Hero Cup was held at Abu Dhabi Golf Club, and this week marks the first of three individual competitions held in the United Arab Emirates.

This tournament began in 2006, and the inaugural edition was won by Chris DiMarco, one of two Americans who have won this event (the other being Rickie Fowler in 2016). Martin Kaymer holds the record with three wins here, which came in a four-year span from 2008-11. Along with Fleetwood, the only other two-time winner of this event is Paul Casey, who won in 2007 and ’09.

After being held at the Abu Dhabi Golf Club—site of last week’s Hero Cup—the tournament moved to Yas Links last season. The course is a first-of-its-kind links-style course in the Middle East. Naturally, that will favor players who excel in that type of layout. It also leads to typically higher scores, as Pieters’ 10-under 278 was the highest score to ever win this tournament.

Yas Links is par 72 and measures 7,425 yards in length. Water is in play in nine of the 18 holes, and typical of a desert layout, there is plenty of sand to deal with. The finishing stretch goes par 4, 3, 5 with the 18th hole being a monster 646-yard hole for those closing out their round. A golfer can try to cut the corner on the hole and reach the green in two, but there are also perils. Hatton’s scores on it in 2022 included a 7 and a 9.

It’s fitting that two Englishmen and an Irishman are favored at Yas Links. These three have also played well on the Arabian Peninsula and are past winners of this event, but all three were inconsistent in their debut here in 2022.

Along with his two wins in this event, has eight top-15 finishes in 14 starts on the Arabian Peninsula since 2019. He finished at +1 here last year, but he finished 2022 strong by winning the Nedbank Golf Challenge and came in fifth at the DP World Tour Championship the following week. Despite being on the losing end of the Hero Cup last week, Fleetwood enjoyed his role as captain of the Great Britain and Ireland team and played well. He won both of his team matches and topped Pieters in a singles match on the final day of the competition.

Jumped up 21 spots to finish in sixth here last year after a final-round 67. He would’ve been even better if it wasn’t for his four-over performance on the 18th hole in the third round since he finished three shots behind Pieters in the tournament. The Englishman hasn’t won since taking home first place in this event in 2021, but he finished last season strong with a trio of top-10 finishes, including tying for runner-up at the DP World Tour Championship in November.

Has had success on the links, winning the 2019 Open Championship, and was ninth at the Irish Open last year. Despite finishing 21st at St. Andrews, he was at par or better in all four rounds. He did struggle, however, at the Alfred Dunhill Links Championship, missing the cut in that event in October. His last win came in September against a strong field at the BMW PGA Championship at Wentworth. Last year at Yas Links, he played with Pieters in the final pairing, but a 5-over 77 on Sunday relegated him to a tie for 12th on the final leaderboard.

hasn’t won since the 2018 Open de France, but he’s on a streak of three-straight runner-up finishes on the DP World Tour, including a second at the Alfred Dunhill Links Championship. He also competed in five events in the fall portion of the PGA Tour schedule, making the cut in each and finishing fourth in his last event (Houston Open).

Started strong with a 65 last year and won despite going just 3-under over the final 54 holes. He had an interesting time at the Alfred Dunhill Links Championship, starting with a 65 but following that up with an 83 on Friday. Despite that, he still made the cut and finished under par in the third and fourth rounds to come home in the 28th. He also has a second and third among the results of his last seven tournaments.

Won the Scottish Open in 2021 and finished in the top five in two events in his home country of Australia last month. In a total of six events since October, Lee has five top-10 finishes and a 12th.

Of the top three, we find Fleetwood and Hatton to be in the best form. Lee is also due for a breakout win given his recent form. Further down the odds board, Victor Perez (+5000) and Callum Shinkwin (+6600) have performed well on links courses and have good value.

Here are the latest odds from JazzSports for the DP World Tour’s 2023 Abu Dhabi HSBC Championship.

Follow us on Social Media for more 2023 Abu Dhabi updates.