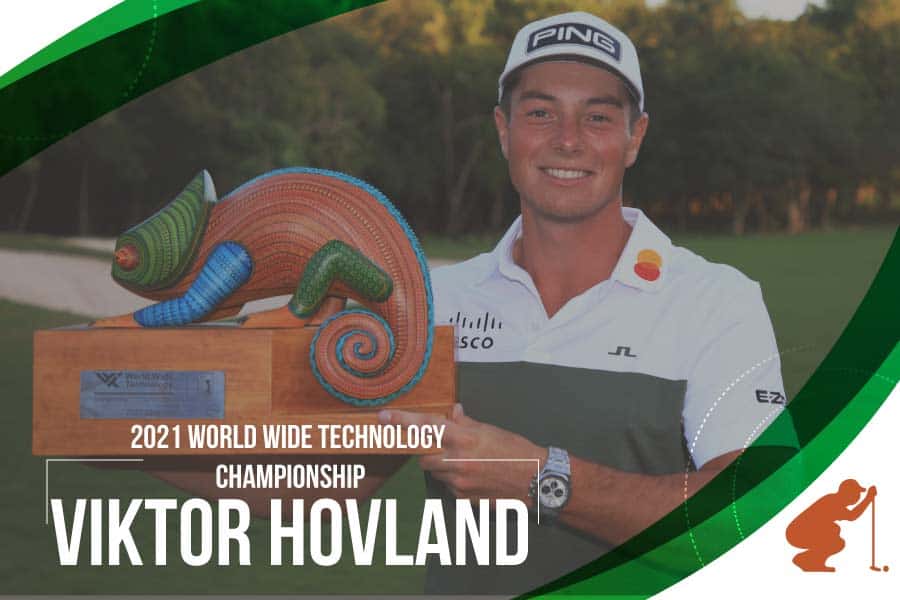 Even though Viktor Hovland was quite a ways away from his homeland of Norway, there were about 15 Norwegian fans who made the trip to sunny, warm Playa del Carmen, Mexico to cheer on their home-country favorite in the hopes that he would win the World Wide Technology Championship for the second year in a row.

Those fans’ efforts paid off, as Hovland did just that, dominating on his way to a four-stroke win over Carlos Ortiz, whose bid to become the first Mexican-born PGA Tour pro to win on his home soil fell one spot short. Viktor Hovland shot a four-under 67 on Sunday to finish with a 23-under 261, setting the tournament record at El Camaleon Golf Club in the process. The 24-year-old surpassed Matt Kuchar’s 262 that he posted in 2018 by one stroke.

“The Norwegian people are very patriotic, and it’s cool to see that I can get so much support even in Mexico, which is pretty far away from Norway; they were great,” Hovland said after securing his third PGA Tour win. “They applauded good shots and obviously cheered a little bit extra when I made a putt. It was really nice. I want to thank them a lot.”

After winning the Puerto Rican Open in 2020, Viktor Hovland was unable to defend his title there because he qualified out of the event. So this was his first defense of a title on the PGA Tour, and he’s one for one.

After shooting a 67 and 65 in the first two rounds to put himself in contention, he shot at 62 on Saturday and then finished the front nine on Sunday at 3-under for the day. Even though he finished the back nine at one-under, he was able to do enough before that final nine to essentially close the door to any challengers.

“I was coming in with some high expectations, but obviously for it to end like this and win by four shots, it’s been a cool week,” Hovland added after his round. “I would say I’ve had better ball-striking weeks, but to put a good ball-striking week with good short game and good putting is something that I haven’t done very often.”

Abraham Ancer got most of the local headlines, as the native of Mexico won the WGC-FedEx St. Jude Invitational last year and figured to be strong here. After after three-straight 68s, he shot a 65 on Sunday to finish tied for seventh at 15-under—a solid performance, without a doubt.

But Carlos Ortiz was the top-finishing Mexican, finishing at 19-under after a 65 on Sunday sent him from fourth to second on the final leaderboard. After finishing second here last year as well, Ortiz surged on the back nine, recording five birdies to pass everyone except Hovland, and bringing excitement throughout the gallery that willed him to an excellent finish.

“I’m really proud,” Ortiz said after his round. “It was a tough day. I couldn’t really find anything on the front nine, and I just kept pushing. The people, having them out here, all my friends, I just found a way to get something going. And it’s funny how golf works, but once you hit that first shot that you see and how you want it, it just clicks and I just find that confidence that I needed to finish strong.”

Ryder Cup champs Justin Thomas and Scottie Scheffler had their best finishes of the year, ending up third and fourth respectively. Thomas was in the runner-up spot most of the day before Ortiz, his playing partner on Sunday, surged down the stretch, finishing with a birdie that sent Thomas into third.

“Mexico’s so great with their fans,” Thomas said. “They’re so loyal to their own and yeah, he’s a celebrity here, as he should be. He played great and really finished very, very strong those last seven holes. He just had to make that putt on 18 to clip me by one.”

Scheffler was a shot behind Thomas as 17-under for a solo fourth-place finish. Matthew Wolff shot a 65 on Sunday to rise 12 spots over the final 18 holes to finish tied for fifth along with Joaquin Niemann at 16-under. Wolff was the leader at the halfway point but stumbled with a 74 on Saturday, so his 65 got him back into a solid position to end the tournament. His other results this year are a runner-up at the Shriners Hospitals for Children Open and a 17th at the Sanderson Farms Championship, so he’s playing solid golf and is worth a look in future events.

The big mover on the day was Danny Lee, who jumped 30 spots with a 64 to finish tied for seventh. Ancer also finished at 15-under, along with Sergio Garcia and Andrew Landry. Ancer has five-straight top-25 finishes at Mayakoba, including three in the top-10 in that span. Both he and Ortiz will be heavy favorites here in 2022.

One spot behind them, tied for 11th at 14-under, was Maverick McNealy, Seamus Power, Brendon Todd, and Talor Gooch, who shot a disappointing 3-over 74 on Sunday after he started the day in second, just three shots behind Hovland for the lead.

Hovland’s win was the first of the back-to-back variety since Brooks Koepka won the PGA Championship in 2018 and ’19.

Viktor Hovland is also the fifth-straight international golfer (non-American) to win on the PGA Tour this year, a streak that started when Sungjae Im won the Shriners Hospitals for Children Open last month. The other winners that followed are Rory McIlroy, Hideki Matsuyama, and Lucas Herbert. Next week’s event is the Hewlett Packard Enterprise Houston Open—the first tournament back on U.S. soil since the CJ Cup four weeks ago. Ortiz is the defending champion, buoyed by his second-place finish here, and he will have 13 major winners to contend with in the field at Memorial Park Golf Course

Sign up and make sure to stay tuned for Viktor Hovland updates, golf news and PGA Tour schedule