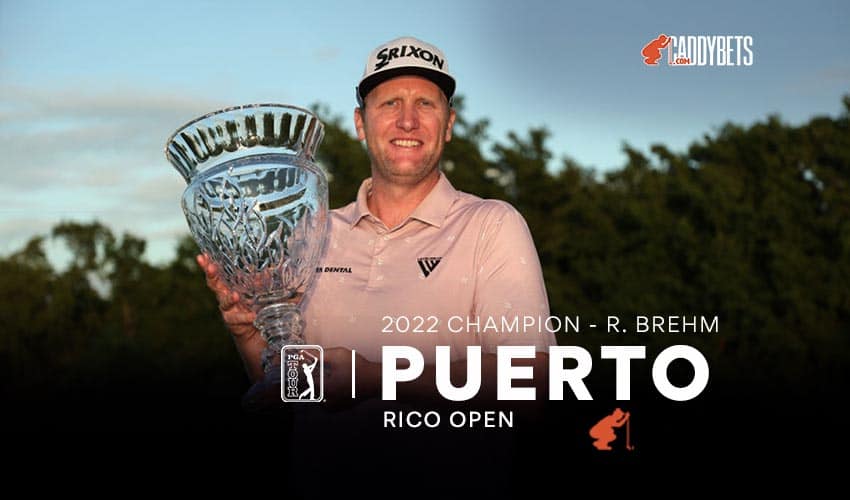 With the bigger names on the PGA Tour playing in the Arnold Palmer Invitational in Orlando, a golden opportunity was afforded to a golfer who would win the Puerto Rico Open at Grand Reserve Golf Club in Rio Grande.

Ryan Brehm, ranked 771st in the world coming in, would be the one to take advantage, entering Sunday with a three-stroke lead and a chance to win his first PGA Tour event. He left nothing to chance, birdieing five of the first 11 holes en route to shooting a 67 to win the tournament by six strokes with a 20-under 268.

Since the event was opposite another PGA Tour event, full winner’s privileges aren’t afforded to the winner here (such as a berth into the Masters), but 300 FedEx Cup points are awarded, an entry into next weekend’s Players Championship along with a spot at the PGA Championship, and most importantly for Brehm, a two-year exemption on the PGA Tour.

Brehm, 35, needed to win or finish second here to retain his status on the PGA Tour, and now he can breathe easier for a couple of years.

“It might sound like Bill Belichick or Nick Saban here, but honestly, wasn’t thinking about the impact of my status or anything this week,” Brehm said. “I think that’s probably the real lesson here. I have people on my team that will do that for me. Really, I just need to put my head down and hit good golf shot after good golf shot. That’s my job and I’m going to trust people around me to do their job and they can take care of all those details for me.”

One interesting note is that Brehm is caddied by his wife, Chelsey, and the duo became the first husband-wife winner on the PGA Tour since Patrick Reed won the 2013 Wyndham Championship with wife Justine on the bag.

After his early run of birdies, Brehm just played it safe as conditions got windy on the seaside course.

“I think [the weather] helped me because I was over a couple shots and I just mentally went, `Just hit it.’ It worked out every single time. It doesn’t always do that, but today it did. That weather got crazy,” Brehm said.

Max McGreevy shot a 3-under 69 on Sunday to finish in the runner-up spot at -14, six shots behind Brehm. Brandon Wu tied for third with Tommy Gainey at -13 while Callum Tarren and Chad Ramey were tied for fifth at 12-under for the tournament.

Chris Gotterup, a senior at the University of Oklahoma, finished in seventh in his debut event on the PGA Tour. He qualified for the event by winning the Puerto Rico Classic collegiate event on this course last month.

Brehm joins top golfers in the world in Ponte Vedra Beach, Florida, for The Players Championship, which is known as golf’s unofficial fifth major. The field consists of 48 of the top 50 golfers in the Official World Golf Rankings, including defending champion Justin Thomas.

Join us to receive our daily Golf content, and make sure to stay tuned with the Official World Golf Rankings and golf odds.