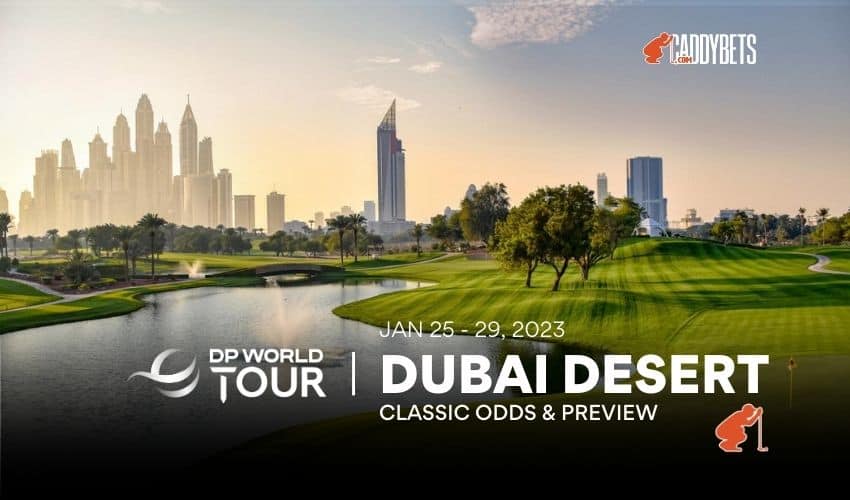 Rory McIlroy, who has maintained his grip on the top spot of the Official World Golf Rankings despite not playing a competitive round of golf for over three months, makes his 2023 debut this weekend at the 2023 Hero Dubai Desert Classic.

The event is a Rolex Series event on the DP World Tour; it’s the second such event in as many weeks and one of five for the year. Due to the elevated status, the purse is a record $9 million, matching the amount that golfers vied for last week in Abu Dhabi.

The Dubai Desert Classic dates back to 1989 and is the oldest tournament to be held in the Middle East. With the exception of the 1999 and 2000 editions, the tournament has been held at Emirates Golf Club since the beginning.

The list of former winners here is impressive. Ernie Els holds the record with three wins here, and two-time winners include McIlroy and Tiger Woods. Other winners of the Desert Classic include Fred Couples, Seve Ballesteros, Colin Montgomerie, Sergio Garcia, and Viktor Hovland, who won last year’s event in a playoff over Richard Bland. Hovland, however, is not defending his title this week.

The par-72, 7,428-yard Majlis Course at Emirates Golf Club will host the DP World Tour pros this week. It’s unique in that the front nine is a par 35, whereas the back nine is a par 37. After last week’s European-style contest at Yas Links, Emirates GC provides a more traditional desert test: it’s an exposed course where the wind is often a factor. Water is also in play in 10 of the 18 holes. New for 2023 are re-done greens, which are now larger and open up new pin-position possibilities.

Bryson DeChambeau set the course record with a 24-under 264 in 2019, but last year’s winning score was -12, which shows how the wind can affect things at this event.

McIlroy a Heavy Favorite in Return to Dubai

Is playing for the first time since winning the DP World Tour’s season-long championship in Dubai last November, where he finished fourth behind winner Jon Rahm. McIlroy finished third here last year to kick off what was an amazing 2022. There were two things that eluded him, however: one, a major championship; two, a win on the DP World Tour circuit. He won last year’s overall title due to eight top-five finishes in 10 starts, including strong finishes in all four majors. Here at Emirates, McIlroy has top 10s in each of his last nine appearances in this event, including wins in 2009 and ’15.

Has finished in the top five here three times, including a fourth last year. He was one of the favorites in Abu Dhabi last week, but he started with an even-par 72 and wasn’t in contention for the win. Despite that, he finished with a 65 on Sunday to move up to seventh on the leaderboard.

On the other end of the pendulum, last week was Shane Lowry. The links ace was leading going into the final round at Yas Links only to shoot a 4-over 76 on Sunday to drop to 28th in the final rundown. He’ll be looking to redeem himself hereafter also winning a Rolex Series event late last year in the BMW PGA Championship at Wentworth.

Has just two top-10 finishes here in 11 tries with the last coming in 2018 when he finished sixth, and he was 38th last week as one of the favorites in Abu Dhabi. Something to watch for, however, is the link between winners of the Nedbank Golf Challenge in South Africa and this event. Fleetwood won at Gary Player Country Club here, and a total of 12 golfers who won the Nedbank have finished in the top two here at Emirates GC.

Was on our radar last week, and he nearly came through for us, finishing just one stroke behind winner Victor Perez at Yas Links. But the performance allowed him to keep his hot streak going from late last year, giving him five top-four finishes in his last seven starts. He missed the cut in his only other try here two years ago, but it almost can be discounted with the way he’s playing now.

Two other top-finishing golfers from last week are winners Victor Perez and Francesco Molinari, who continued his strong play while captaining the Continental Europe team to victory at the Hero Cup two weeks ago to then finish tied for fifth. Molinari is clearly motivated to qualify for the European team at this year’s Ryder Cup, which is taking place in his home country of Italy. Perez closed with a 66 last week to pick up his third-career win.

Is coming up on the defense of his win at the Ras Al Khaimah Championship next week, and while he missed the cut here last year, he’s one who plays to his form. He was consistent in finishing 10th last week with an opening-round 71 followed by three scores in the 60s.

Has been in good form all across the globe, winning the U.S. Senior Open last June and contending for the PGA Tour Champions title in the fall. He finished fourth last week and was ninth in this event a year ago, so he’s played well as of late in this part of the world too.

There’s very little value in McIlroy at +300, but with Jon Rahm tearing it up on the PGA Tour, it will be interesting to see if McIlroy is motivated to issue a response. We’ll still stay away from him in favor of value picks Hatton, Lowry, Lee, and a longshot in Harrington.

Keep up with the latest golf news and updates! Register for a 50% Sports Welcome Bonus.