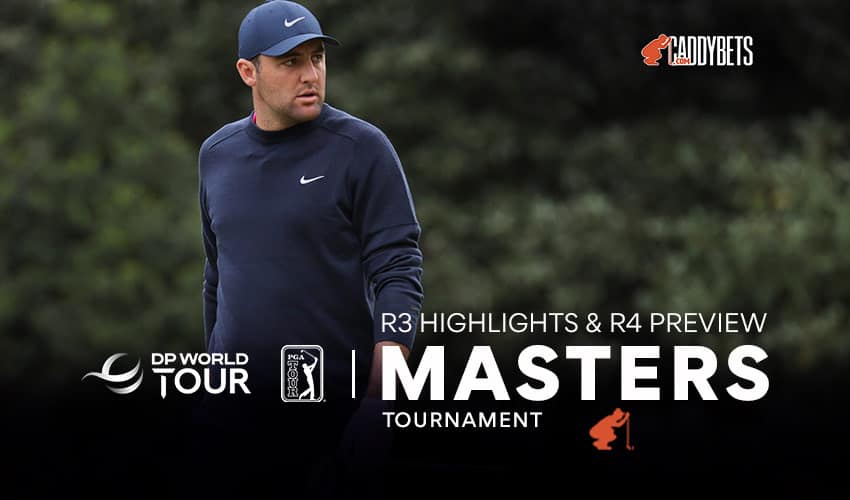 It’s almost fitting that the winner of the Masters will come down to the two hottest golfers on earth. Scottie Scheffler and Cameron Smith have combined for five wins already this PGA Tour season, and one of them will walk away with the sixth come Sunday. Here is our 2022 Masters Round 3 Recap with odds and a preview for the final round.

This win is a little more significant with all due respect to those other tournaments. Putting on that green jacket is every golfer’s dream and puts you in an elite group.

Is it possible that both Scheffler and Smith implode and neither win? Of course, we’ve seen it before. Mcllroy lost a four-stroke lead here in 2011 and is probably the worst meltdown in Masters history, Greg Norman lost a six-shot lead in a cringe-worthy final round in 1996, but the way these two guys are playing, I wouldn’t expect that.

Sung-Jae, Im only sits two strokes back of Smith at 4-under, and he’s five back of Scheffler. For Im, to be at 4-under is pretty impressive, considering he was almost a 4-over at one point in yesterday’s round and now sits at +1500 odds, as projected by Jazzsports. Consider this, in the last 31 Masters, 26 champions have come from the final pairing, so the odds are with Scheffler and Smith.

Smith has been brilliant this week, as he sits three shots back of Scheffler at 6-under after shooting the best round of the day on Saturday, a 68.

Cameron Smith battled through the cold and windy conditions on Saturday to collect six birdies, which gives him 16 birdies across three rounds, which is double the field average. Smith also increased his odds to win here on Sunday to +260, as projected by Jazzsports.

Scottie Scheffler continues to show why he’s the No.1 player in the world as he currently sits atop the leaderboard at 9-under after shooting a 71 on Saturday. Scheffler has been my pick all along and now sits at -230, as projected by Jazzsports, and I see no reason why he can’t close this out this evening. I fully expect to see Hideki Matsuyama sliding a green jacket onto the back of Scottie Scheffler around 7 pm tonight. With all that being said, Scheffler will need to stay consistent for the entire round on Sunday because Smith is good enough to take advantage of any missteps. Scheffler did struggle a bit on the back nine yesterday, showing that he was, in fact, human.

Bogeys on No. 12, No. 14, No. 15, and No. 18 left Scheffler at 9-under, one stroke better than he started for the championship but closer to the field than he hoped after an impressive start to the round. It actually could have been worse on the 18th as Scheffler had to make a fantastic approach shot out of the pine needles in the forest.

It’s rare you get the two hottest golfers in the world in the final pairing on Sunday at Augusta, but the golf gods have seen fit to accommodate this year. So in a Masters that started with a bunch of storylines, it all comes down to one, and all the eyes of the golf world will be on Scheffler and Smith as they battle out for the ultimate prize, the green jacket.

The 2022 Masters odds for the final round have been posted. Scottie Scheffler remains the favorite, as projected by Jazzsports. In addition, all odds to win the tournament have been updated below:

Follow us on Social Media for 2022 Masters Round 3 Odds highlights & Official World Golf Ranking, the Masters latest updates and more!