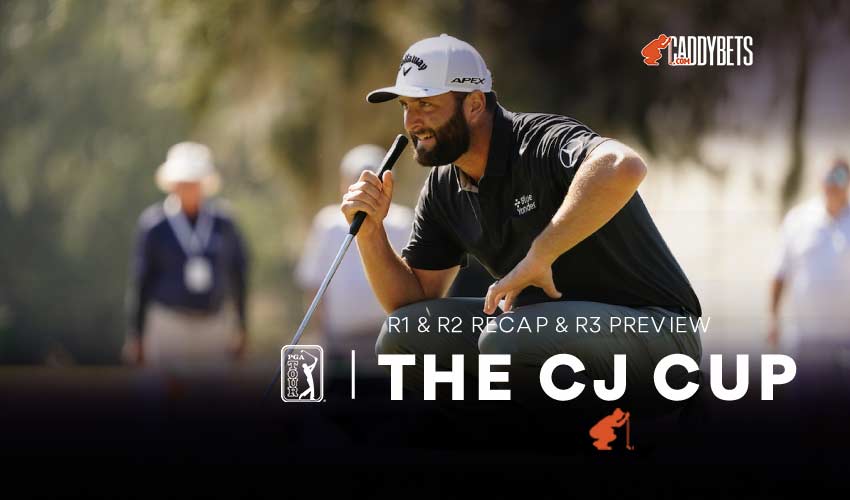 This season’s CJ Cup held at the Congaree Golf Cup in South Carolina is shaping up to be a classic as a string of top names dominate the top of the leaderboard. Here our CJ Cup Rounds 1&2 Recap

Currently leading the way are the duo of Kurt Kitayama and Jon Rahm with the pair sitting at -11. They sit one stroke clear of Aaron Wise and Cam Davis with defending champion Rory McIlroy sitting just two behind the halfway leaders.

Last season was a frustrating one for former world number one Jon Rahm. The Spaniard wasn’t able to make any dents in any of last season’s majors and saw his place at the top of the world rankings usurped by Scottie Scheffler.

However, things are clearly clicking this season. Rahm was successful just a few weeks ago in the Spanish Open and he has clearly bought that form with him this week.

After a slow -2 first round, Rahm shot to the top of the leaderboard with a stunning second round -9, 62. It would have been even better had it not been for a dropped shot at his last hole. Rahm looks back to his best and will start the weekend as the tournament favourite.

Kurt Kitayama has produced two rounds of 66 and 65 to join Rahm at the top of the leaderboard. Kitayama has become one of the most solid players on Tour but is yet to win on the Tour proper. He has a great chance of putting that record right this weekend.

Rory McIlroy almost created history in his second round when he came just a few feet away from scoring an albatross. McIlroy had to settle for a -4, 67 second round but will be hoping he can make the most of moving day to fire himself into the lead heading into tomorrow’s final round.

Despite the presence of some big names at the top of the leaderboard, thirteen players will start the day just four shots off the lead and this tournament is still very much up for grabs.

Jon Rahm will start today’s third round as the tournament favourite and a win this weekend will see him climb back towards to the top ranking spot in the world.

Nobody has played better golf this year than Rory McIlroy. The reigning FedEx Champion is looking to start the new season right where he left off. McIlroy clearly has a swagger about his game and at +350 he could be the value play of the day.

Aaron Wise is a name that we are becoming accustomed to seeing at the top of leaderboards. Wise finds himself once again in contention and looks primed for another excellent weekend.

Cam Davis has recently spoken about how his first Presidents Cup appearance has given him huge amounts of renewed belief. The Australian is hitting the ball extremely well, a one time winner on Tour the big hitting Aussie could well double his tally here.

Outside of the top four in the betting, Tom Kim will be looking for his second victory in as many weeks. The South Korean will start the day four back but odds of +2500 could be a steal if he can hit the ball as well we know he can.

Follow us on Social Media for more CJ Cup Rounds 1&2 Recap and for Round 3 updates & check the Official World Golf Rankings, and more!