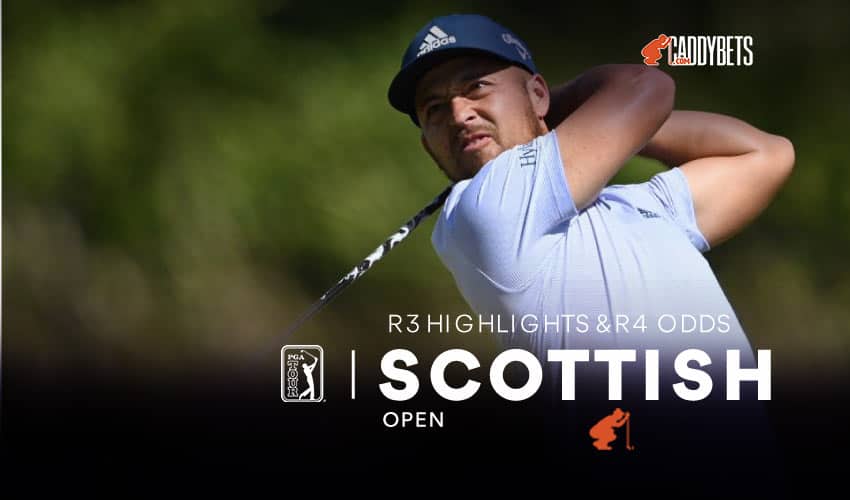 Scottish Open Round 4 Odds & Round 3 Recap

After three rounds of this year’s Scottish Open, Xander Schauffele leads the way following a third-round -4, 66. Saturday’s third round saw the leaderboard change as overnight leader Cameron Tringale tamely dropped away following a +4, 74. Here is the Scottish Open Round 4 Odds & Round 3 Recap!

Xander Schauffele started the day 4 strokes behind Tringale but carried great momentum into the third round following a second-round 65. With Schauffele’s game in a great place, he backed up his second-round performance with a great round of 66. It could have been even better for the American had he not bogeyed his last two holes. He leads by two strokes heading into today’s final round.

Schauffele’s dropped shots on both 17 and 18 have opened the door to the chasing pack.

Starting the day two strokes behind the American is Rafa Cabrera-Bello. The Spaniard has proved himself a canny links player in the past and is a former winner of this tournament. Cabrera-Bello has shot three rounds in the 60s to sit at -5 and he will be doing his best to apply pressure to Schauffele today.

Three strokes behind are the trio of Ryan Palmer, Jordan Smith, and Jordan Spieth. Smith produced one of the highlights of the tournament when he aced the 17th in his second round and has stayed in contention ever since.

Spieth, a former Open Champion had an eventful third round. The American’s 66 saw him record two eagles, including a special approach on the 15th which saw him hole out from the fairway. Consistency is the name of the game for Spieth and if he can keep his ball out of trouble he is in with a real chance of victory.

Everything is set for a fantastic final round where everyone near the top of the leaderboard will believe they can win.

Scottish Open Round 4: Odds and Preview

Xander Schauffele is looking to capture his tenth PGA Tour title and his second consecutive victory following his success at the Travelers.

Schauffele showed at the Travelers that he can handle the pressure of leading a tournament as he converted the victory having led after the third round. If Schauffele plays sensible golf he will be tough to overhaul.

Next in the betting comes Schauffele’s Ryder Cup teammate Jordan Spieth. Spieth was able to taste success earlier in the year with success at the RBC Heritage which has a similar layout to this week. With his short game skills, Spieth’s game is ideally suited to the links. Spieth’s chances will come down to his tee shots. If he can keep the ball on the fairways, look for the Texan to make his charge.

Rafa Cabrera-Bello looks to be the value play of the round. The Spaniard is a former winner of this tournament and has previously finished 4th at the Open. Currently, the Spaniard doesn’t have a place in next week’s Open field but a top 3 finish would be enough to see him qualify. With three rounds in the 60s so far, something similar today could put him right in the mix.

Branden Grace could be a player at a big price. The South African has a heavy wallet after his $4 million success in last week’s LIV Golf Series. Grace came from off the pace last week, and after shooting an impressive 67 yesterday he could be primed to do so again.

Follow us on Social Media for Scottish Open Round 4 Odds & Official World Golf Ranking, and more!