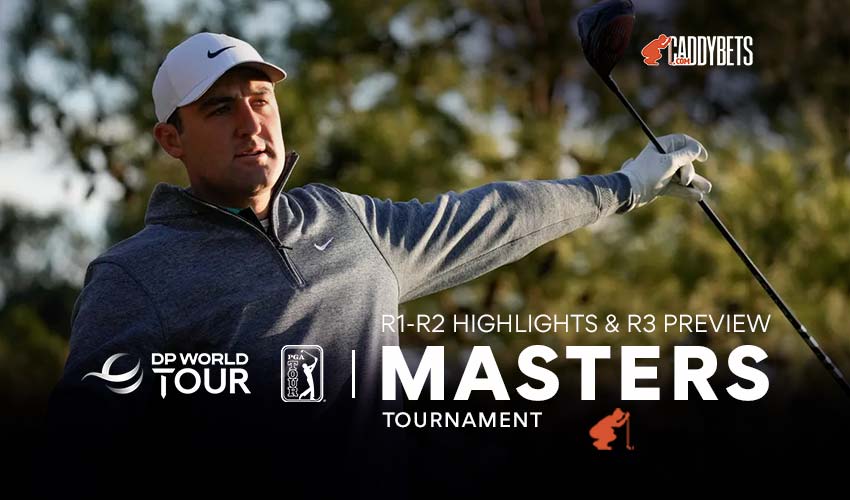 The Masters Round 1 – Thursday

I’ve never seen thousands of fans crowd the first hole to watch the 973-rd player in the world tee off with such anticipation, but there they were, watching Tiger Woods, who played his last round of competitive golf here in November of 2020, would actually tee off.

It was more a question of will I witness the GOAT, my idol, look like a broken shell of himself, or will he provide a little more of that Tiger magic that this generation of golfers hasn’t seen. Tiger delivered early with a long walked-in par putt that seemed to send an already excited crowd into a frenzy, on his way to shooting a 1-under 71 for the round.

I can spend a whole article on Tiger’s play on Thursday, but they’re certainly were other storylines for this event like no other.

In fact, at a quick glance at the leader board, you might think they reposted the scores from 2020, as the three names at the top remain the same, although in a different order.

In 2020 Dustin Johnson beat Sungjae Im and Cameron Smith for the title. After their first round on Thursday, it was Im atop the leader board over Johnson and Smith as he finished his round of 67.

Augusta National played tough on Thursday, and there were only 18 golfers who finished their first round under par with no putting very much distance between them and the field, which sets us up nicely for some drama come the weekend.

One of the golfers lurking right behind the top three is my pick to win this weekend, Scottie Scheffler, who quietly put together another solid round finishing with a 3-under 69. I’m confident Scheffler will remain in contention come Sunday afternoon.

The Masters Round 2 – Friday

Scottie Scheffler wasn’t even quite a year old yet when a 21-year-old golfing phenom named Tiger Woods won his first Masters, and now both are playing and will compete for a Masters Championship this weekend.

Although, if Scheffler keeps playing like he is, there won’t be much of a competition for the green jacket.

If people were questioning the last six weeks of golf from Scottie Scheffler as a fluke, then they certainly got a dose of why Scottie Scheffler is currently the No. 1 golfer in the world and sits as the clear favorite heading into the weekend at -110, as projected by Jazzsports.
Scheffler was dominant in his round on Friday, matching Justin Thomas with the low rounds of the day at 5-under, leaving him 8-under for the tournament and a five-shot lead heading into Saturday.

Scheffler’s up-and-downs were brilliant, as he used his short game to save par when needed, and his putting was almost automatic. On greens in which everyone seemed perplexed, Scheffler appeared to have a magnet on his ball, finding the bottom of the cup whenever he needed to drain a putt.

Scheffler was my pick to win earlier this week, and I’m not deviating from that pick after his play over the first two rounds.

Sitting in a group behind Scheffler at 3-under is defending champion Hideki Matsuyama who has seen his odds jump to +1200, as projected by Jazzsports, Sungiae Im at +2000, Shane Lowry at +1200, and Charl Schwartzel at +5000.

Sitting a stroke behind that group at 2-under is a group headlined by 2020 Masters winner Dustin Johnson at +1200 and Cameron Smith at +1200, as projected by Jazzsports.

I would be remiss if I didn’t mention the performance put on by Tiger Woods Friday. In windy and somewhat cold conditions, Woods started slowly; in fact, I thought it was great to see him battle on Thursday after he opened with double-bogeys taking him to 4-over, but something changed in his eyes.

He began to look like the Tiger of old, staring down the pin and stalking the fairways with a purpose. Woods battled back to 1-over, making his 22nd consecutive cut at the Masters, which in itself is impressive. Tiger Woods currently sits at +8500 odds, as projected by Jazzsports, and has put himself in a position to be a factor come Sunday.

The question will be, as the weather grows colder, can his body handle two more intense rounds, and does he have enough Tiger magic left to chase down a golfer as hot as Scottie Scheffler? I’m not sure of either, but it certainly will make for a fantastic watch this weekend.

Scottie Scheffler has been inserted as the favorites, as projected by Jazzsports. In addition, all odds to win the tournament have been updated below:

Follow us on Social Media for 2022 Masters Round 1-2 updates & Official World Golf Ranking, the Masters highlights and more!