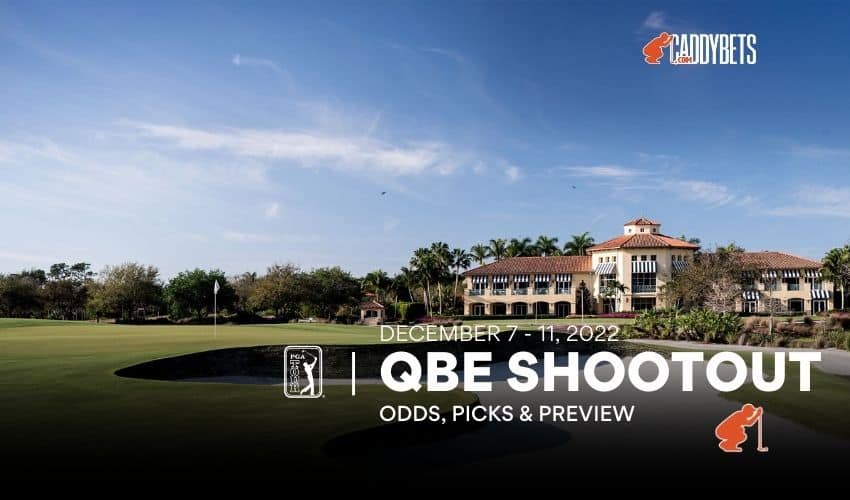 Harris English and Matt Kuchar have one last chance to break a tie in the record book and win a fourth 2022 QBE Shootout, an unofficial money event on the PGA Tour and the final tournament of the year.

This is their final opportunity because starting next year, this event will become a mixed event with the LPGA, and each team will consist of one male and female golfer. This year, two of the 12 teams are mixed. Lexi Thompson is competing here for the third time while Nelly Korda is making her debut.

English and Kuchar took home the championship in 2013, ’16, and 2020. The team finished in third place last year in the three-round event, two shots behind Jason Kokrak and Kevin Na. Kokrak and Na are not here to defend their title because the duo has since left the PGA Tour for LIV Golf.

This event dates back to 1989, and there are three other three-time winners here: Kenny Perry, Brad Faxon, and Scott McCarron. English and Kuchar, however, are the only two to win all three titles with the same playing partner.

The Gold Course at Tiburon Golf Club in Naples, Florida has hosted this event since 2001. It’s a par 72 and has a length of 7,382 yards. Despite the length, the women won’t be at too much of a disadvantage due to the format: scramble on Friday, modified alternate shot on Saturday, and better ball on Sunday.

Along with the three wins, English and Kuchar also own the tournament record, shooting a 37-under 179 in 2020, winning that event by nine strokes, which is also a record for this event.

Will Day and Horschel Top English and Kuchar?

Plenty has been said about Harris English and Matt Kuchar, who are +500 co-favorites along with Jason Day and Billy Horschel. Kuchar hasn’t won an official PGA Tour title since 2019, but that hasn’t kept him from succeeding here. English had a great 2021 but has been working his way back from hip surgery for most of this year. His fall schedule picked up, making the cut in six of seven events with a top finish of ninth at the Fortinet Championship.

Horschel was runner-up here last year with Sam Burns, and now he’s teaming with Day, who won this event in 2014 with Cameron Tringale. Day finished tied for third in 2021 with Marc Leishman. Day has four finishes inside the top 20 this fall while Horschel was seventh at The CJ Cup in one of two fall PGA events. Horschel also won The Memorial in June.

Despite both playing this event for the first time, Tom Hoge and Sahith Theegala (+600) are getting respect from the oddsmakers thanks to their strong play in the fall portion of the PGA Tour season. Hoge has missed the cut in his last two starts, but prior to that, he had a fourth at the Shriners Children’s Open to go along with three other finishes no worse than 13th. The 25-year-old Theegala is coming off a runner-up finish at The RSM Classic a few weeks ago and also has two other finishes inside the top six to his credit this fall.

Keep an eye on Max Homa and Kevin Kisner (+700), as they are the only other team besides English and Kuchar to renew their pairing from 2021, and they were tied for fifth last year. They were also teammates at the Presidents Cup, so there’s some camaraderie with this duo too. In fact, BetMGM is reporting that the most bets have been placed on this team. Homa struggled at the Hero World Challenge last week, finishing 17th out of 20, but he was 4-0 at the Presidents Cup and won the Fortinet Championship in September. Kisner was even worse in the Bahamas, coming in 19th and has played just twice this fall with a best finish of 29th, so their recent form would be the only negative for this pairing.

Both are in good form—the two have combined for five finishes of third or better since the Tour Championship. Harman’s worst finish in four events this fall is 23rd, and he’s finished runner-up in his last two starts. His worst round out of 16 this season is a 71. Straka was second at the Sanderson Farms Championship but missed his last three cuts. He bounced back with a 10th at the Hero last week. The two are also friends from their days at the University of Georgia.

Have the longest odds in the tournament, but don’t write them off. Thompson has a best finish of fifth here in 2017 in five attempts. McNealy has made his last five cuts with a pair of top-10 finishes in that span.

Both are making their debuts in this event. McCarthy has made the weekend in six of his seven tournaments this fall and also set two milestones in 2022: first top 10 in a major (seventh at the U.S. Open) and reached the BMW Championship in the FedEx Cup playoffs. Korda is the second-ranked golfer in the world in the women’s game and won the Pelican Women’s Championship last month. She also came in 10th here at Tiburon just a few weeks ago.

Out of the two favorites, we would back English and Kuchar given their exceptional history here. We also like the first-time pairings of Hoge and Theegala and Harman and Straka over the Homa and Kisner duo. Out of the two longshots, we like Korda and McCarthy coming in as first-timers.

Follow us on Social Media for more 2022 QBE Shootout updates!