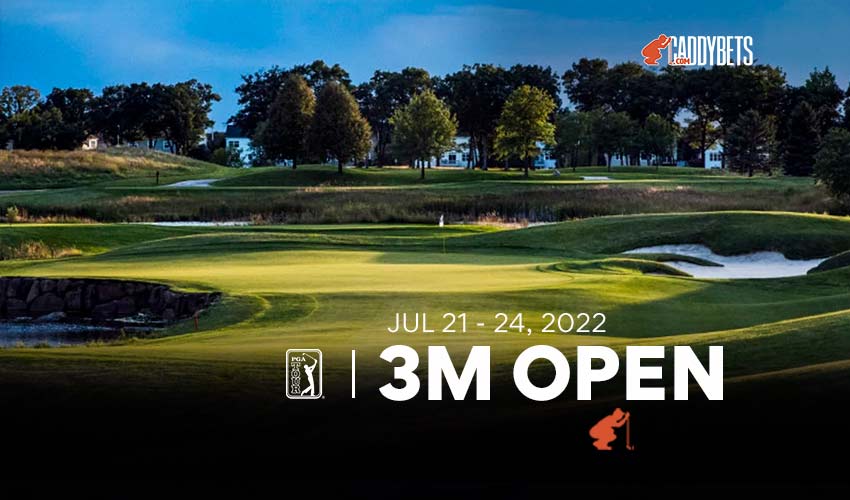 After two big events overseas in the Genesis Scottish Open and the Open Championship, the PGA Tour returns to the United States for the 2022 3M Open, the first of three events leading up to the FedEx Cup Playoffs next month.

This is the fourth edition of this event after TPC Twin Cities held the 3M Championship as part of the PGA Tour Champions series from 1993-2018. In the first three editions, Matthew Wolff, Michael Thompson, and defending Cameron Champ were all heavy underdogs prior to winning.

TPC Twin Cities in Blaine, Minnesota—a suburb of Minneapolis—hosted the senior tour event annually and was then renovated (at the direction of Tom Lehman) prior to the first PGA Tour stop here in 2019. It’s a par-71 course for the pros with just three par 5s.

There is some variety in the final three holes, as No. 16 is a par 4, No. 17 is par 3, and No. 18 is a monster 586-yard par 5 that has just a 35-yard-wide fairway. Depending on how risky a golfer wants to be, they either have to contend with water on the first or second shot. Greens at TPC Twin Cities are also generously large but can give way to some 80-foot putts.

While the value may lie further down the odds board, bigger-name golfers are the three favorites here.

Was third here in 2020, and his hot putter has led to some nice finishes after struggling for much of this PGA Tour season. He finished second to Jon Rahm at the Mexico Open, was runner-up to Rory McIlroy at the RBC Canadian Open last month, and finished tied for fourth the week before that at the Charles Schwab Challenge. Finau is coming off a 28th-place finish at St. Andrews.

Is typically a birdie machine, but he’s been off the pace the past few weeks. After missed cuts at the U.S. Open and Genesis Scottish Open, Im made the cut at St. Andrews but wasn’t great in an 81st-place finish at the Open Championship. From the Masters to the Memorial, he had no finish worse than 21st, and TPC Twin Cities is more in line with those courses, so a bounce-back could be in order for Im.

Has had an up-and-down last two months: he was third at the Byron Nelson but then was 60th at the PGA Championship and disqualified at the Memorial. He followed that up with a top-five at the U.S. Open but then had a missed cut and 68th at the Scottish Open and Open Championship, respectively. He’s played this event once, coming in seventh in 2019.

Had four top-five finishes from March through May, but he cooled off slightly in June with a 31st at the U.S. Open and 64th at the Travelers Championship. Davis took the last few weeks off, so he will be refreshed coming into this event.

Is another rookie sitting at +2000. After a bit of a slump following his third-place at the WM Phoenix Open in February, Theegala is 8-for-8 in cuts since May 1, including a fifth at the Memorial and tied for runner-up at the Travelers Championship, and TPC River Highlands compares favorably to TPC Twin Cities. Theegala’s run also allowed him entry into the Open Championship, where he finished a respectable 34th.

Is coming off two-straight top-10 finishes at the John Deere Classic and Barracuda Championship, and he’s remained in the United States, so he won’t be as jet-lagged as those in the field who competed in the Open Championship.

Has one of the best histories at this course, as his two times here produced a fourth (in 2019) and a sixth (2021). Maverick McNealy was one shot off the lead going into the final round last year but fell back to 16th after shooting a 73 on Sunday. He has top-10 finishes in two of his last three events.

Qualified for the Open based on his win at the John Deere Classic two weeks ago, but he missed the cut at St. Andrews. He will be returning to a course that could be good to him, however, as Poston finished tied for second at the Travelers the week before the John Deere on the strength of a final-round 62 in Connecticut.

Doesn’t have a top-five finish to his credit, but he’s made seven-straight cuts and was a career-best sixth at the Barbasol Championship last week after racking top-25s at the Travelers and John Deere.

Won the Barracuda last week and was 11th here at TPC Twin Cities last year, so he has a chance to add a full-field win to his resume.

For a further longshot that’s fit the bill of the prior three winners here, consider Troy Merritt Merritt grew up in Minnesota and played this course often as a teen. He has a pair of fourth-place finishes this year—Pebble Beach and the Valero Texas Open—and was seventh in the inaugural 3M Open in 2019. Last year, he was the co-leader after an opening-round 64, but a 74 on Sunday dropped him down the leaderboard to a 39th-place finish.

We’re going to take a pass on the three bigger names at the top of the odds board and stake claims on Davis, Theegala, and Hadwin. Poston and Svensson provide great value, and if you’re feeling lucky, add Merritt to your lineup.

Follow us on Social Media for the 2022 3M Open & Official World Golf Ranking, and more!