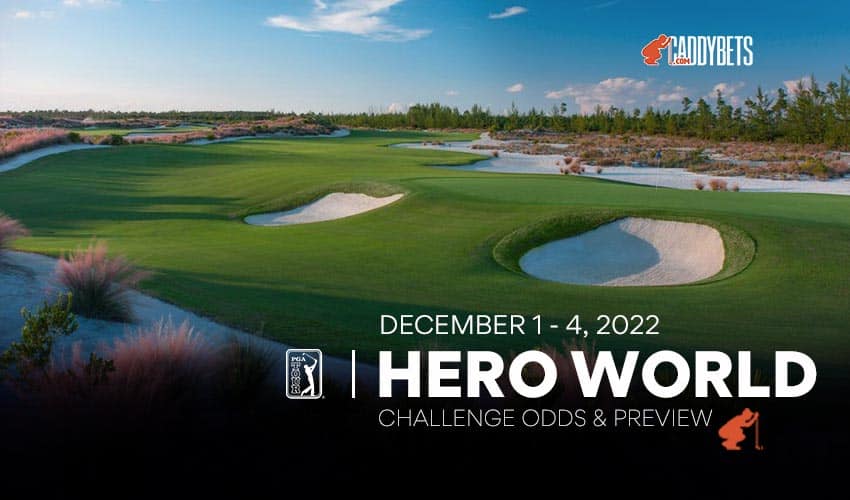 Rahm and Finau Among Favorites at Tiger-Less Hero World Challenge

We were going to see Tiger Woods compete for the first time since the Open Championship, but he has withdrawn from his all-star-like event this week due to a foot injury. Even so, 20 of the world’s top golfers are in the Bahamas for the 2022 Hero World Challenge.

Woods, the host of this event, winning five of the first 13 editions of this event, which started in 2000. Graeme McDowell is the only other repeat winner. Viktor Hovland is the defending champ while there are two other former winners in the field: Jon Rahm (2020) and Jordan Spieth (2014).

Last year, Collin Morikawa looked to be cruising to victory coming off a DP World Tour Championship and leading by four strokes going into the final round, but a 76 on Sunday allowed Hovland and three others to pass him. It’s been a rough year since for Morikawa, who has yet to win another tournament.

Albany Golf Course was designed by Ernie Els and is a links-style layout despite being on an island in the Bahamas. It’s a par-72, 7,309-yard layout. In five of the last six tournaments held at Albany, the winning score has been -18, including Hovland’s one-shot victory over Scottie Scheffler last year. The course record is held by Bubba Watson, who shot a 25-under 263 in 2014, which was the first year the tournament was held at this venue. Wind is in the forecast, so scores could be a bit lower this year.

Amid Hot Streaks, Rahm and Finau Among Favorites

Comes into the event as the betting favorite, having won two of his last four tournaments worldwide and finishing the top five in the other two. The wins came in the Open de España on the DP World Tour and then three weeks ago at the DP World Tour Championship in Dubai, where he outdueled Rory McIlroy. Rahm also finished second at the BMW PGA Championship and was fourth at The CJ Cup last month. He also has a win and a second-place finish in this event, so good form plus good course history is always a great combination.

Comes to Albany having finished one shot behind Hovland on the leaderboard last year. Since then, we all know of his four-win stretch in six tournaments, including a Masters win in April. Scheffler hasn’t won since, but he’s been knocking at the door several times, so a win here would not be a surprise.

Pulled out a runner-up finish here in 2018 and comes in as the hottest golfer this side of Jon Rahm. Finau won his last start (Houston Open) and has been victorious in three of his last seven tournaments dating back to the summer.

Has largely been quiet since winning the PGA Championship in May. He’s only played once since the Presidents Cup, coming in 40th at The CJ Cup. We’re not sure what to expect with his form, but he has finished fifth here in both 2020 and ’21.

Has a top-10 finish in his only event of the fall season (Zozo Championship) and won twice over the summer, but he’s finished no better than eighth in three tries in this event. Typically, the Olympic gold medalist performs well in no-cut events, but he hasn’t mastered this course yet. One of his wins this year, however, came in the Genesis Scottish Open, giving him a win on a links course in 2022.

Coming in at +1400 at defending champion Viktor Hovland, Matt Fitzpatrick, and Sungjae Im. Im is making his debut in this event and has been knocking on the door for another win for quite a while now, finishing second in three of his last eight starts. Fitzpatrick, the U.S. Open champion, was 12th in his debut here last year.

Hovland was on a hot streak last fall, winning this event and a PGA Tour tournament earlier last November as well. This year, he comes in having finished fifth in his most-recent PGA Tour event and was fourth in The Open Championship at St. Andrews.

The 20-year-old, has been one of the best stories of this golf year. He came out of nowhere to reach the FedEx Cup playoffs by winning the final event of the regular season, and he followed that up with another win at the Shriners Children’s Open in Las Vegas. A 25th and 11th followed, and it’s been over a month since his last tournament, so he’s well-rested. Don’t expect the moment and the competition to be too big for the rookie.

Comes in a newly married man and looking for redemption after last year’s final-round collapse. He’s made the cut in all three tournaments he’s played in this fall but hasn’t scored a top-10 finish, so his game may not be where it needs to be to beat this strong field.

Odds aren’t that long on anyone in the 20-man field, but two names to watch at +2000 are Shane Lowry and Tommy Fleetwood. Both have won this fall on the DP World Tour, and Fleetwood bookended his win earlier this month with a fifth-place finish at the DP World Tour Championship and a fourth at The CJ Cup.

Lowry, winner of the BMW PGA Championship in September, is making his debut here, but the Irishman is a links specialist. He won the 2019 Open Championship and had a top-25 finish at St. Andrews this year. He also came in ninth at the Irish Open on the European tour a few weeks before the Open Championship.

Among the big favorites, we’ll back Rahm. Scheffler has been inconsistent, and it’s been more feast or famine for Finau (prior to his win in Houston, he missed the cut in Mexico). We’re then zeroing in on the next tier with Im, Hovland, Fitzpatrick, and Kim. Europeans have won the last three editions of this event, and we see the non-American trend continuing.

Sign up here to get a 50% Sports Welcome Bonus and get the latest Golf Gambling Odds by Jazzsports.